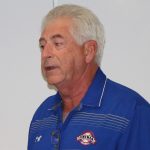 This letter was submitted by Reston resident John Pinkman, a member of the Rescue Reston board of directors. It does not reflect the opinions of Reston Now. We publish article and opinion contributions of specific interest to the Reston community. Contributions may be edited for length or content.

On Monday, Oct. 2, Rescue Reston will hold its third annual golf fundraiser on the course that Northwestern Mutual would like to turn into thousands of housing units. All fundraisers are directed toward the legal defense. Will NWM stay in town and make a commitment to our community, as did Mobil? I don’t think so; if there were a door, you would hear NWM slam on their way out! See ya!

Through my work with Rescue Reston, I have criticized myself for the inability to create a sense of loss throughout the community that we would experience if we lost the open space the golf course provides. I was hard on myself — until I learned how few Restonians voted in the Reston Association Board elections. Way less than 10 percent, I’m told.

I understand apathy; I expect it. However, Reston was not built on apathy. Thousands of people have worked hard to create the community we thrive in today. It costs more to live here because of the discipline of the way we choose to live. As a result, we have succeeded. The manner in which we built this town has yielded consistent national recognition. It’s a special place.

When I was young, I lived in Houston. They exuded pride in having no zoning regulations. The out-of-control pace of development stretched the city’s boundaries in Texas-size growth. That is, until the housing bust plummeted values and the recent rains came. You could build a million dollar home and see a 7-Eleven store spring up on one side and an oil rig on the other. I don’t remember even a neighborhood in Houston, let alone a sense of community.

When I first saw Reston in the late ’60s, I instantly felt a sense of community. When I returned in 1978, I walked into the Reston Festival at Lake Anne and instantly decided — this is home. There is not a day I walk through the plaza without recalling that celebration of Reston in ’78.

We have lived here for 40 years, 25 in a home on the golf course. We have worked so hard to buy our home and invest in Reston as we raised our three kids and now seven grandkids. As have thousands of others, we have contributed to our neighborhood and community. The beat goes on; our children and their spouses are all teachers making an impact.

Let me be clear; our family is far from unusual. Other families also have a long legacy and have done much to make Reston what it is. Why do 90 percent of people who live here care so little about its future as to ignore their right to choose the leaders who guide that future? Are they too busy? Got to get the kids to soccer? “All I care about is driving on these nice roads, seeing the trees and kicking back. I’ll let someone else take care of the future.” Apathy.

No doubt everyone has a reason, specifically valid to himself or herself, for focusing inward of their own four walls. Busy for sure, but apathetic about the very nature of how we evolve and unaware of how we have to fight to preserve the very concept of Reston, only arousing when the threat of uncomfortable or inconvenient change rustles the bushes close to home.

For decades, Reston has fought the internal view of North and South Reston. Honestly, I have never understood that concept. Even before the Wiehle Avenue bridge was built, we developed as one community — many neighborhoods but one community. We took pride in the big “Reston” billboard on Route 7. Perhaps I feel that way because of the years I’ve spent in recreation and teaching players. We would use all of the parks, pools and fields.

But in the process of trying to preserve our open space, I have been amazed to hear comments like “that’s a South Reston problem,” “I don’t play golf,” or “I live in North Reston — don’t care.” Any problem that affects a neighborhood in some way impacts the entire community. Sometimes more, sometimes less, but we must direct our efforts to understand the effect on the whole.

We must be united in facing the big issues, regardless of the immediate neighborhood where we live. Six thousand housing units and the multiples of people residing on 167 acres of what is currently open space would have a domino effect on the entire area. It changes how we move, how we educate, the value of a RESTON property. It changes our patience too.

There are before us now many issues that require the energy of our leaders and their followers. We need to remember that the best way to achieve solutions to the challenges we face is for more people to become involved in the process. I am committed to the Steven Covey quote, “begin with the end in mind.” That’s how we became Reston. That’s how we shall deliver this town to our children who love to return and raise their own children.

If you have read this far it’s only right that I ask you to help support Rescue Reston’s Golf Tournament on Oct 2. Play golf that day. If you don’t play golf — seriously — everyone knows someone who does! Call them; ask them to play. Stay up on Northwestern Mutual’s continual assault to destroy those 167 acres at RescueReston.org/golf.