Deputies from the Loudoun County Sheriff’s Office had their hands full Sunday with a pair of chases involving local residents.

At 3:14 p.m., on Route 50 near Aldie, a deputy saw a vehicle speeding. When the officer turned on his lights, the driver sped off. The pursuit ended in the area of Eagles Landing Place, in the Lenah Mill community. The driver was identified as 43-year-old Rama K. Grandhi, of Herndon. He was arrested and charged with eluding police and reckless driving, 20 mph or more over the posted limit. He was later released from the Loudoun County Adult Detention Center on a secured bond.

That same day, at about 8:04 p.m., a deputy spotted a black SUV going through a stop sign at the intersection of Loudoun County Parkway and Ryan Road in Ashburn “at a high rate of speed and almost [causing] the deputy to crash.” The deputy turned on his lights and pursued the vehicle. According to the report:

The vehicle then ran several stop signs and stop lights before striking a parked unoccupied vehicle on Olympia Drive before turning onto Regal Wood Drive. The driver fled on foot from the vehicle in the area of Regal Wood Drive and Vickery Park Drive. After a period of time, the driver was located in the nearby area and was taken into custody without incident.

The driver was identified as 18-year-old Alexander E. Fisher, of Reston. He was charged with auto theft, felony eluding police, destruction of property, reckless driving and driving without a license. He is being held at the Loudoun County Adult Detention Center without bond.

Meanwhile, in Fairfax County, FCPD’s Reston District Station reported the following crimes in the past week: 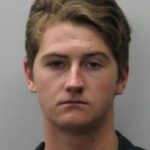 Elsewhere in the county, police have arrested a man in connection with a series of assaults on women using trails in the Fairfax area in recent weeks. Jeremiah Whitmore Tolley, 21, of Fairfax has been charged with eight counts of sexual assault. In each case, women said a man — who police say is Tolley — grabbed them from behind and groped them. Tolley is at the Adult Detention Center, being held without bond.

As we reported earlier today, a pair of Reston men were also charged in Loudoun County with vehicle tampering and an auto theft. The men, ages 21 and 19, and also suspected to be involved in a series of gunfire complaints in the area in recent weeks.

No major incidents were listed in the Herndon Police Department’s weekly press report.