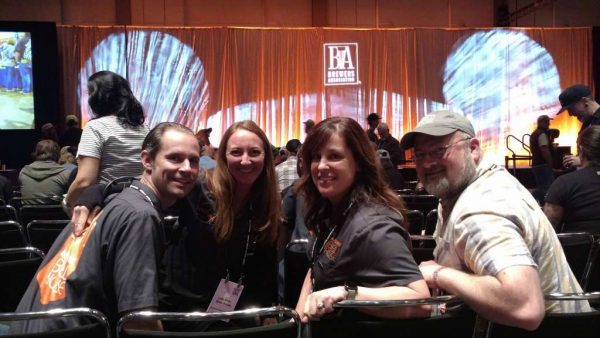 Lake Anne Brew House, Reston’s only brewery, returned from the Great American Beer Festival, the world’s largest commercial beer competition in Denver, without any medals but plenty of high hopes for next year.

The brewery submitted two beers to the festival, which hosts more than 2,200 breweries with nearly 8,000 entries in 98 categories of competition. The contest, which is run by the Brewers Association, took place over three days and was judged by more than 250 beer experts from 13 countries, according to a release.

Competition was stiff this year, according to Melissa Romano, the brew house’s co-owner.

“We are extremely proud of our beers, and know that they showed well in competition. We’re looking forward to returning next year, with more entries and another shot at bringing [a] GABF gold home to Reston,” she said.

Other breweries in Virginia also struggled to bring medals home. The Dulles-based Ocelot Brewing Co. was the only local brewery to bring back a bronze medal in the state in the baltic porter category, according to Romano.

Romano said she was especially impressed by the collaboration between breweries in Loudoun and Fairfax counties. Several local businesses shipped beers for judging to Denver in a single shipment.

“It’s a pretty cool thing in an industry where we’re all competing together and yet we all ship together. A win for one is a win for all,” Romano said.

Since opening in April last year, Lake Anne Brew House has won several competitions, including three awards during the Virginia Craft Beer Cup in June, which is presented by the Virginia Craft Brewers Guild. Its Lord Fairfax EPA and Reston Red Ale were honored with second and third-place awards in the 2016 Craft Beer Cup, just months after the brew house opened last spring.

Next year, Romano said the brew house plans to submit more entries to increase chances of a win.

“We all had a great time for sure. It was just fun to be there with brew houses from all over the country and learn from each other. We hope to bring back a gold for Reston next year,” she said.