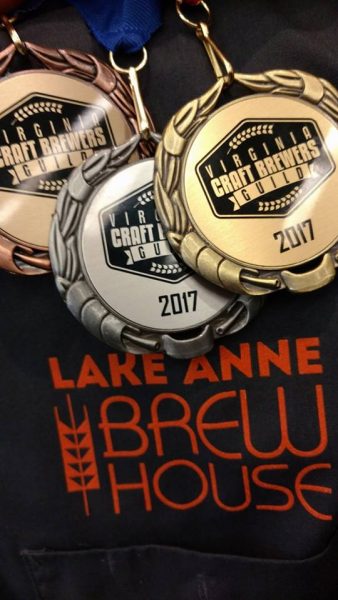 Reston’s only brewery represented the community well at the Virginia Craft Beer Cup earlier this week.

“We were one of only two breweries in the state to win three medals, which is kind of cool,” said Melissa Romano, the brew house’s co-owner. “We were super-excited about our medals.”

The beers will be showcased in the brew house in the weeks and months to come, Romano said. Their New Year’s Golden Ale (aka 2017 Golden Strong Ale) had been meant as a New Year’s Eve one-off, she said, but they are now re-arranging their brewing schedule to bring it back. The golden ale will also be served at the Virginia Craft Brewers Fest in August, and Romano said they are considering entering it in the Great American Beer Festival.

“It will make its return to the taproom, much to the delight of everyone who thought they weren’t going to get it again until next winter,” Romano said.

A total of 356 beers across 24 categories were considered for the awards. A team of 40 judges selected the honorees, and a full list of winners is available here.

These are not the first awards for Lake Anne Brew House. Its Lord Fairfax EPA and Reston Red Ale were honored with second- and third-place awards in the 2016 Craft Beer Cup, just months after the brew house opened that spring.

“We set out in this business to just make really high-quality beer, not to be too crazy and experimental, not to do too many trendy things,” Romano said. “Jason [Romano, Melissa’s husband and brew house co-owner] is a fantastic brewer, and our assistant brewers are also incredibly skilled. … They know what they’re doing. They’re trying to nail the style standards, and I guess they’re succeeding.”

“We love them and they love us,” she said. “I’m glad to know that we’re making people happy.”

For more information on Lake Anne Brew House, check out its website or find it on Facebook.