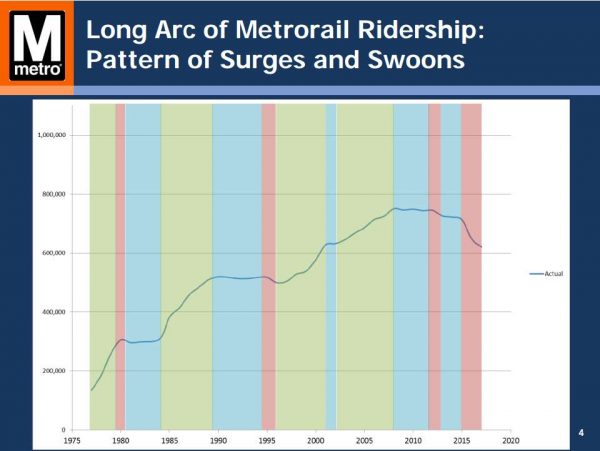 Nearly a third of Metro’s ridership decline in recent years is attributed to decreasing performance, according to information that will be presented to WMATA’s Finance Committee during its meeting this week. 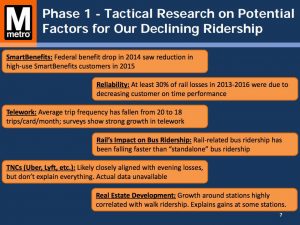 According to its report on ridership between 2013 to 2016, Metro says there are several factors that have contributed to the drop. In addition to the failing reliability, the named factors include the federal benefit drop in 2014 that reduced high-use SmartBenefits customers; an increase in telework that has decreased AM peak ridership on Fridays; and the popularity of ride-hailing apps such as Uber and Lyft.

The report lists four “marketing and communications efforts” that are planned in the effort to promote ridership: 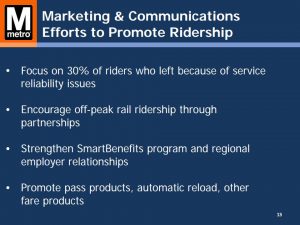 In its latest “Back2Good” initiative report, Metro says railcar reliability was up more than 50 percent in the first seven months of 2017 when compared to that same time in 2016. It also says there were 60 percent fewer HVAC issues in July 2017 than in July 2016.

“These efforts will continue in the coming months as we hope to see sustained improvements, such as the reduction in passenger offloads and improvements in customer on-time performance,” reads the report. “However, we realize that it will take some time to regain the trust and confidence of customers needed to return to the system.”

At the end of the report, the Metro board and Metro-served jurisdictions are given examples of ways they can help increase ridership:

Metro’s next set of board and committee meetings is slated for Thursday.