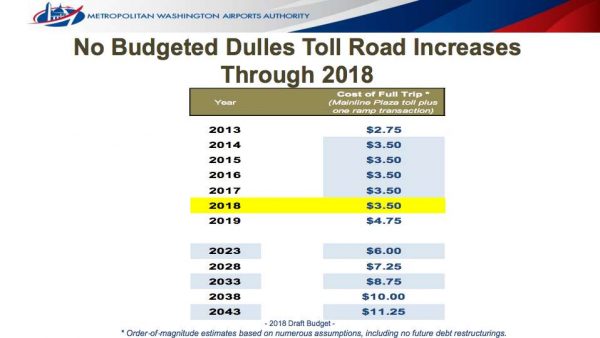 Users of the Dulles Toll Road can expect to pay more in 2019, according to a 2018 draft budget presented to the Metropolitan Washington Airports Authority Board today.

No increase from the $3.50 toll ($2.50 at the plaza and $1 at the ramp) is planned in 2018; however, it is expected to jump to $4.75 the following year. Numbers presented by the Board’s Finance Committee show that is only the beginning of the hikes.

Tolls are used in part by MWAA to help fund the expansion of Metro’s Silver Line. Nearly half the cost of the construction, about $2.8 billion, is being paid by Toll Road fees.