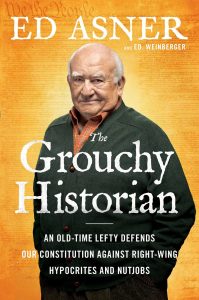 By his own admission, Ed Asner is a “dauntless Democrat from the old days.”

The legendary actor will be at Bowtie Cinemas (11940 Market St.) in Reston Town Center on Saturday, Oct. 28 from 2-3:30 p.m. to sign copies of his new book, “The Grouchy Historian: An Old-Time Lefty Defends Our Constitution Against Right-Wing Hypocrites and Nutjobs,” and to chat with fans.

According to the book’s summary, Asner is making the argument that liberals need to step up to challenge “right-wingers who think that they and only they know how to interpret [the Constitution].”

Scrawl Books (11862 Market St.) is selling copies of the book, which will also be for sale at the theater event. Following the book-signing, a screening of Asner’s short film “The Flood” is planned as part of the Washington West Film Festival. Tickets to the film-screening will be sold separately.

Among his many credits, the 87-year-old Asner is likely best known for his role as Lou Grant on “The Mary Tyler Moore Show,” a character which was later spun off into its own show. He is also well-known by a younger generation for his voice role as Carl Fredericksen in Pixar’s “Up.”

Asner was nominated for seven Emmys for his role as Lou Grant on “Mary Tyler Moore,” winning three. He won two more Emmys for his work on “Lou Grant” and two for his work in other projects, including the acclaimed mini-series “Roots.” Off-camera, he was president of the Screen Actors Guild from 1981-1985.

For more information about the event in Reston, email [email protected].