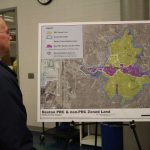 The amendment would increase the maximum allowed population per acre in the Reston PRC from 13 persons up to 16.

The zoning change could also open up Reston’s village centers to increased major residential development. The proposal would allow the Board of Supervisors to approve developments above 50 residential units per acre within the district’s Transit Station Areas (TSAs) — so long as the projects comply with the area’s master plan that guides development.

The letter comes in response to spirited opposition from several hundred people who attended a public meeting on Monday, Oct. 23 at Reston’s South Lakes High School. Passionate residents spoke out for roughly two hours against the proposal. The auditorium’s 600+ seats were full, with a solid perimeter of standing audience members as well, plus an overflow room nearby was full of even more people, following along on video. A video of the meeting is available to watch on RA’s YouTube channel.

The letter thanks Sup. Hudgins and the other board members for providing detailed information and holding the community meeting, which RA staff said were “crucial in order to reach an informed decision regarding whether or not to support the amendment, proposed by County staff.”

“The Community Meeting held at South Lakes High School on October 23, 2017, with well over 900 in attendance, was informative. Based on both the County staff panel discussion and the community comment, the Reston Association Board of Directors opposes the County Staff’s proposed PRC District Residential Density Zoning Ordinance Amendment,” the letter reads.

In the letter, the RA staff also asks county supervisors to hold off on any further consideration of the PRC density cap increase until RA staff and county staff together can examine the Reston Master Plan portion of the county’s Comprehensive Plan:

In conclusion, RA staff said they would like to work collaboratively with supervisors and county staff on matters that affect Restonians’ futures.

“Your reply to these requests is eagerly awaited by Reston Association and its members. We look forward to hearing back from you
soon on next steps,” the letter concludes.

RA President Sherri Hebert signed the letter, and said in a statement regarding it on the RA website, “The sustainability of Reston’s unique planned community structure is everyone’s goal. Because we share this common goal, I am confident we can work together to attain it.”

In addition, the statement said that the Fairfax County Board of Supervisors has voted to direct RA staff to “work with Fairfax County staff to exclude Reston from the proposed Building Repurposing Comprehensive Plan amendment as it applies to the conversion of office to residential.”

Read a full copy of the letter on the RA website.

Documentation regarding the Land Use Agreement and Board discussion is available on the RA website.