Nearly two hours of sometimes fiery public comment was part of the meeting (video), where representatives of Fairfax County’s departments of planning and zoning, parks, transportation and more addressed questions about the proposal to increase the overall limit on people per acre in Reston’s Planned Residential Community (PRC) District from 13 to as much as 16. 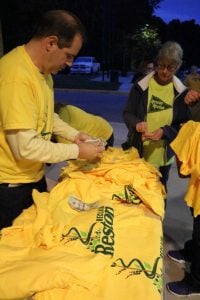 John Mooney, of Reclaim Reston, estimated more than 900 people attended the meeting. The nearly 650 seats in the SLHS cafeteria were filled, and the room’s perimeter was lined with standing attendees. A few dozen residents watched the meeting from an “overflow room” in a nearby lecture hall. Many in attendance were wearing yellow shirts to show their unity, and some of those people purchased those shirts from a Reclaim Reston vendor table set up at the school’s front door ahead of the event.

A major point of contention brought up by several of the speakers is the appearance that the county is forgetting about those who currently live in Reston as they work to appease developers, Metro and others outside the community who would benefit from increased growth. Residents spoke of diminished quality of life and increased problems with issues such as increased traffic and lost green space if the community builds out to the 16 people-per-acre level at the high end of the proposal for the PRC district.

Hunter Mill District Supervisor Cathy Hudgins said hearing comments from some residents that they don’t want to see any more people move to Reston and that they want to halt development altogether “chills” her.

“I feel concerned to say that Bob Simon was a developer and Bob Simon developed the plan that [the county is] implementing,” said Hudgins, who was interrupted numerous times during her remarks by murmuring and shouts from the crowd. “I really, really want to think about what kind of Reston we are, and I’ve been here 48 years. It was a place that said, ‘Hello, you’re welcome, please come.'”

The PRC District does not include any of the fast-growing Transit Station Area property surrounding the Wiehle-Reston East and Herndon Metro stations, nor does it include most of the property in the Reston Town Center Metro station TSA south of the Dulles Toll Road.

The ordinance amendment would also allow for the Board of Supervisors to be able to approve individual developments in excess of 50 dwelling units per acre in TSAs within the PRC and when in accordance with Comprehensive Plan recommendations. Citizen activists warn that the combined effect of these changes could see the population of Reston tripled by 2050.

An increase to the density cap would not guarantee any development; rather, staff said, it would ensure the opportunity that future development requested can be considered.

Referencing a speaker who said she had recently moved to Reston, Hudgins asked the crowd if people such as her should only be allowed to move in when someone else moves out.

“If it’s a yes to that, that means that no growth comes to Reston ever again,” Hudgins said, which was met with applause by many in attendance. “I can tell you, if that’s what you believe, it is not Bob Simon’s dream that you’re talking about.” 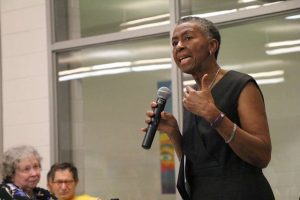 Both Hudgins and county staff said it is important to remember that there are viewpoints within the community that were not being represented by the attendees of the meeting. Fred Selden, director of the county’s Department of Planning & Zoning, referenced changes to Reston’s Master Plan that was updated by Fairfax County in 2014 and 2015 to guide redevelopment in Transit Station Areas, Town Center and village centers — the driving force for why the density cap limit is deemed necessary by the county. The process to make those changes happen included public hearings and Restonians were on the task force, Selden said.

One speaker asked Selden what would need to be done to open the Master Plan up to be re-evaluated and amended once again to limit density. Selden said is eligible for review in 2020, following a five-year implementation process. He said if residents hope to get anything changed prior to that, they would need to petition the Board of Supervisors.

Numerous residents who spoke said for this reason and others, they get the implication that the proposed cap increase is developer-driven. Selden said there are property owners — including not just homeowners, but business owners — are represented in the county’s planning process.

Selden said he was upset by personal attacks lobbed toward him, other staff members and Hudgins during the public meeting.

“Somebody said that, somehow, our motives are being driven by bribes or some other type of endorsement,” he said, a statement which drew the crowd to catcall with the word greed. “That is different from what people might perceive as greedy — that was a personal attack on the staff, and quite frankly, I take exception to that.”

Hudgins said that comments made during the meeting will be taken into account as the process moves forward, including that there are major infrastructure challenges and concerns about affordable housing that must be addressed as the community grows.

Areas that would be marked for possible major residential development if the plan is approved include all of Reston’s village centers. Selden said it is important to note that the village centers have always been marked for high density, and that Bob Simon viewed them as places where people could live and gather — not just as shopping plazas.

“One of the things that we heard loud and clear when we were updating the plan … [is that] the village centers lacked a sense of cohesion,” he said. “[Simon] desperately wanted, going forward, to have the opportunity to look at these village centers differently, because most of them, quite frankly, are just shopping centers. He wanted and he thought that they could be something better.”

The collective opinion of the hundreds of yellow-clad Restonians in attendance was not swayed by the county’s presentation.

“This is vague — there is not nearly enough detail [about] funding, how planning would occur and the like,” said resident Steve Dodd. “It strikes me as a very crude tool if what you want to do is increase the density around the Metro stations.”

Cathy Belgin, of the county DPZ’s Zoning Administration Division, said staff hopes to present its proposal to the Board of Supervisors by early January, followed public hearings in front of the county planning commission and the BoS between late January and early March.