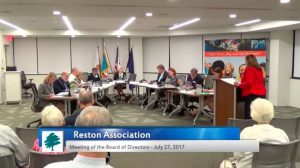 At their monthly meeting, the Reston Association Board of Directors will consider whether or not to carry over nearly $2.3 million in unspent, allocated dollars for capital projects from this year to next year.

The board will also set the schedule for capital projects that will begin in the first quarter of next year, including the $161,000 resurfacing project of clay courts at North Hills and nearly $163,000 in audio visual equipment upgrades to RA’s conference center.

The board will also discuss Reston Association’s Fit Kids Enrichment Club in response to concerns that the Lake House after school care program was being conducted under a different name and location.

The agenda for Thursday night’s meeting of the RA Board of Directors also includes:

The meeting will take place at 6:30 p.m.. in RA headquarters tomorrow. For those unable to attend, the meeting will be livestreamed on Reston Association’s YouTube channel.