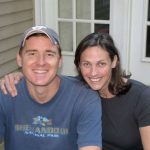 A 17-year-old Lorton teenager suspected of murdering a Reston couple in late December was served petitions earlier this morning, according to the Fairfax County Police Department.

The suspect, who has not been identified by police due to his age, has been charged as a juvenile with two counts of murder after an investigation determined he killed Scott Fricker, 48,  and his 43-year-old wife, Buckley Kuhn-Fricker on the 2600 block of Black Fir Court on Dec. 22, police said.

The teen then shot himself and has remained in a local hospital since the incident.