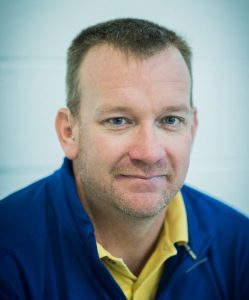 Reston Community Center is welcoming one of its own to head the aquatics department.

Matthew McCall, a 41-year-old South Lakes High School graduate, takes over the role of  Joe Leary, who retired last year after working for RCC for 27 years.

“I was amazed at how much Reston has grown over the years but excited to learn that the same principles and values of inclusion and caring are still so evident here,” said McCall.

McCall graduated from SLHS in 1995 and competed for the school’s swim team. His first aquatics job was as a lifeguard for Reston Association.

He swam collegiately at Transylvania University in Lexington, Kentucky and received a bachelor’s degree in history from Virginia Commonwealth University. He previously held aquatics leadership positions in Orlando with Walt Disney Company and St. Peters Rec-Plex in St. Peters, Missouri.

At the center, he was the recreation leader for aquatics in a center with a 50-meter indoor pool and a diving facility that hosted the 2004 U.S. Olympic Diving Trials.

McCall said he hopes to encourage more people to swim through his position. “Our goal is to give every child in Reston that skill,” he said.

“I am sure his expertise is going to lend itself to future success in the renovated Terry L. Smith Aquatics Center,” she said.