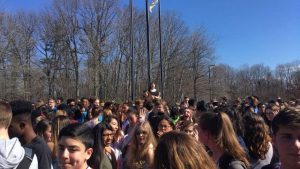 Pushed by the mass shooting at Florida high school this year, students at South Lakes High School will stage a walkout on Wednesday at 10 a.m., joining more than 2,200 schools nationwide as part of the #Enough National School Walkout to End Gun Violence.

For organizers, the need for the walkout – the second at the high school following the Florida shooting – came to life on Friday when three Reston schools were under a lockdown after students reported they saw another student with a gun. Police determined the report was false.

“We should feel safe in our schools, and not have to worry if we are next. Just last Friday, we got lucky. The lockdown was quickly found to be a false alarm through the diligent work of school administration and police. But we should not have to live in a place where we have to see our friends texting and calling their families, terrified for their lives. This is not normal, and it needs to change,” Liao said.

The walkout will be the second for South Lakes High School students. Last month, more than 200 students stepped out of class in the middle of the day to remember victims of the Parkland shooting.

On Wednesday, students plan to stand outside for 17 minutes to honor each victim of the shooting. The walkout will also include remarks and chants from student organizers, according to a release by the South Lakes Young Democrats club.

Although the club is organizing the walkout, organizers said participants are from varying political backgrounds and the walkout is a school-wide initiative. Students also plan to initiate a “call to action” by encouraging participants to vote, call their elected representatives and become involved in political discourse.

“We might not all be experts on gun policy, but we do know that the current status quo is not working,” organizers said.