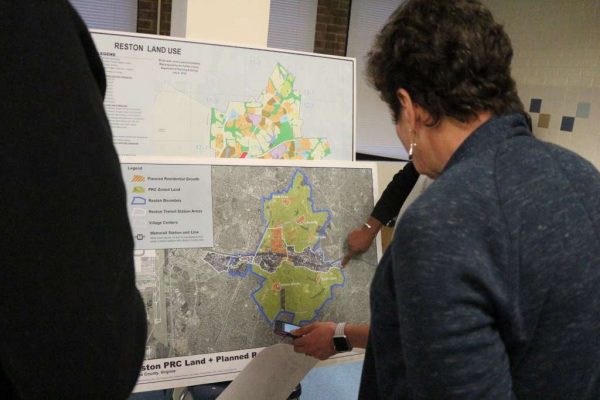 County staff rejected any changes that affect land use, density or intensity recommendations in Reston Master Plan until after 2019, responding to requests by Reston Association’s Board of Directors and the Coalition for a Planned Reston (CPR) to the planning document.

Plans were staunchly opposed by residents in community meetings, while supporters contend the increase is necessary to implement Reston’s Master Plan, which posits major growth potential for the planned community.

Fred Selden, the Fairfax County Department of Planning and Zoning director, wrote that the county is only open to considering clarifications, correcting oversights or editorial tweaks — emphasizing that the plan was the result of a six-year study, recommendations from a 50-member task force, and a significant public engagement period.

“Recognizing the time, energy and community commitment that go into our multi-year land use studies, it has long been the county’s practice not to amend these new plans within the first five years of their adoption,” Selden wrote.

In a point-by-point outline responding to RA’s November 2017 letter and CPR’s February letter, Selden said the county is monitoring plan implementation, including the pace of development and public facilities, schools, parks and road.

The growth of development and resulting infrastructure needs and strains has been cited as a central concern for CPR and RA’s board. County staff reiterated their willingness to work with community groups and stakeholders to address concerns.

Noting that the plan already contains controls to manage development, staff said they will work to develop a phasing plan that will tie future development with specific infrastructure and public facility needs.

The letter also noted the county’s willingness to amend a portion of the plan that allows 50 or more dwelling units per acre, resulting in “unlimited development.” The county is also willing to more explicitly state that redevelopment is recommended in non-residential, mixed-use areas in village centers, not stable residential neighborhoods.

Staff also committed to monitoring the implementation of the Reston Plan and providing a progress report for Reston similar to one performed for Tyson. Staff noted they were open to seeing an overall maximum population, but did not indicate if they agreed with CPR’s recommendation of 120,000.

Other recommendations were flatly rejected, including CPR’s request to require 20 percent of all future dwelling units to be affordable, other requests to reduce the density of dwelling units, and a request to delete language that allows redevelopment of St. Johns Woods.

An attempt to remove the road connection between American Dream Way and Isaac Newton Square — a mapped road across Hidden Creek County Club — was also not favored by staff. The option for the road is necessary to reduce congestion at the intersection of Sunset Hills Road and Wiehle Avenue, county staff said.

The complete letter is below:

Department of Planning and Zoning Response to CPR, RA, Hudgins by Fatimah Waseem on Scribd