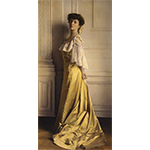 Travel back in time next Thursday evening, May 17 as professional impersonator Elaine Flynn transforms into one of history’s most famous presidential offspring for “Tea With Alice Roosevelt Longworth” at the Reston Community Center at Hunters Woods.

“If the headlines of today’s political scandals make you shake your head in disbelief, wait until you witness impersonator Elaine Flynn dish the dirt on scandals of yesteryear,” describe event organizers.

Roosevelt Longworth was the eldest child of former President Theodore Roosevelt, and his only child with his first wife, Alice Hathaway Lee. As a controversial writer and prominent socialite, Roosevelt Longworth is widely considered by many to be history’s first true “celebrity,” in every sense of the word.

As such, it’s no surprise that Roosevelt Longworth would have some very good gossip indeed, about the lives of the rich and famous around New York City and Washington, D.C. In fact, it’s rumored she first coined the phrase, “If you don’t have anything nice to say, come sit by me.”

Therefore, the theme of this event is “Scandals in the City.”

“Alice starts with her own scandals,” describe event organizers. “She then continues relating the scandals that led to the death of a Congressman; President Harding and his mistresses; the love affairs involving Franklin D. Roosevelt and Eleanor Roosevelt; the person (other than Mamie) who REALLY liked Ike; the women linked to JFK; the Capitol Hill employee who couldn’t file, type or even answer the phone; and the story of the Congressman, Fannie Foxe and the Tidal Basin, and more.”

Registration for this special event in honor of Older Americans Month is $15 for Reston residents and $23 for non-residents. Tickets include afternoon tea and the performance.

The event is co-sponsored by Reston Community Center and the Reston Association and takes place from 1-4 p.m. on Thursday, May 17 at RCC-Hunters Woods, 2310 Colts Neck Road. Register online.

More Stories
Pet of the Week: SassyWhat’s A ‘Bio Blitz?’