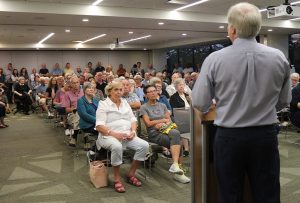 County officials will conduct small working sessions in the coming weeks with representatives from the Coalition for a Planned Reston, a grassroots umbrella organization, and Reston Association.

The meetings are intended to encourage dialogue between county staff and other organizations as the county mulls a controversial plan to increase Reston’s population density in Reston’s Planned Residential Community district from 13 to 16 people per acre.

The working sessions will cover planned future growth and its impact on transportation, schools and public facilities, parks, recreation and open space and overall planning.

CPR, which includes residents from the Reston Citizens Association, Reclaim Reston and Reston 20/20, hopes talks will allow the organization to “further clarify the modifications to the Reston Master Plan proposed by CPR and [RA]” said Lynne Mulston, a spokesperson for CPR.

Ultimately, CPR hopes changes to the Master Plan will eliminate the need or perceived need to boost the density cap.

In March, many suggestions pitched by both organizations were rebuffed by county staff, who argued that proposed changes to Reston’s PRC simply implemented the Master Plan, which was formed with community and stakeholder input.

Most recently, CPR and RA met with Hunter Mill District Supervisor Cathy Hudgins and county staff to resume discussions on May 14.

The working sessions’ statement of purpose, proposed by Fred Selden, Fairfax County Director of Planning and Zoning is as follows:

The purpose of these small group meetings is to continue the dialogue between Fairfax County staff and representatives of both Reston Association (RA) and Coalition for a Planned Reston (CPR) regarding the proposed changes to the PRC zoning district. Each small group will consist of representatives from County staff, RA, CPR and other Reston stakeholders. They will discuss future growth and its implications or impact on public facilities and infrastructure that serves Reston.

The schedule of meetings has not been finalized. CPR and RA are reaching out to subject matter experts to participate in the sessions.