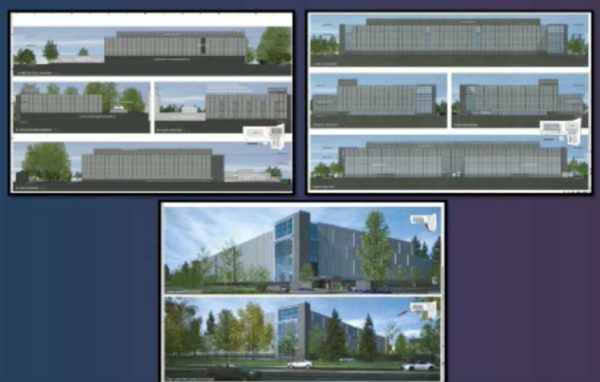 Data centers with a fenced perimeter are inching closer to approval at Sunrise Technology Park, a 21-acre office park with four existing buildings slated for redevelopment. The Fairfax County Planning Commission approved the project by CoreSite Realty Corp. on June 28.

The proposal is part of a move by CoreSite to expand its footprint in Reston. The company selected the location on the south side of Sunrise Valley Drive in order to ensure the operation was near enterprises in Reston. The property was purchased for $60 million from Brookfield Office Properties in 2016.

“They had a choice of where they wanted to be,” said David Gill of McGuireWoods and the developer’s representative, adding that CoreSite was willing to “roll up their sleeves and a pay a premium to adaptively reuse [the] office park.”

The development is divided into four phases, one of which is currently in progress. When the first phase is complete, two existing buildings on the southern half of the property will be reconstructed and expanded with about 291,000 square feet of development. Two buildings will be demolished on the southeastern edge of the property to make way for a three-story building with 240,000 square feet in the second phase.

During phase three, one building and associated parking in the center of the property will give way to a three-story data center and another building. The fourth and final phase on the northern edge of the project will involve the demolition of existing buildings to make way for a three-story data center with 172,000 square feet. The number of stories on the buildings may vary, but will not exceed three stories.

Gill noted that the development will reduce traffic by 60 percent both during peak traffic hours and an overall reduction in trips. The data centers are expected to house a maximum of 45 employees. The development will also remove 700 parking spaces on the largely vacant site, Gill said.

Gill noted CoreSite is using technologies like a cistern that uses rainwater to cool servers. CoreSite plans to address the county’s concerns about LEED certification and energy efficiency before the Fairfax County Board of Supervisor’s vote on the project, Gill said.

During the commission’s public hearing, Brian Carpenter, a resident from a nearby residential zone, said he wanted to ensure security cameras on the property would not compromise the privacy of nearby homes. The issue will be discussed with the developer.