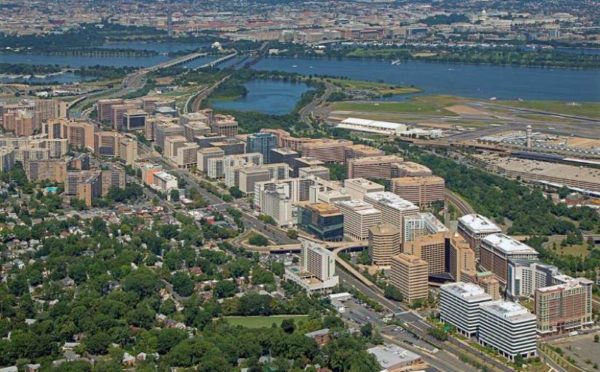 Amazon’s decision to bring its second headquarters to Crystal City is sure to send an immediate and impactful jolt across Arlington, but what’s less clear is how the coming of the technology giant will impact Northern Virginia as a whole.

Although Reston is couched far from Arlington, the community could see a windfall from the new headquarters, which will be split between Arlington and Long Island City, especially with the community’s onboarding to the Silver Line and a planned expansion in development and redevelopment over the next two decades.

Business leaders in the area portend the coming of Amazon will help expedite the transformation of communities like Reston from a federal government town to a technology corridor. That transition is already taking place with the coming of new headquarters like Leidos, a scientific research company, to Reston’s new developments.

Mark Ingrao, CEO and president of the Greater Reston Chamber of Commerce, said secondary and tertiary businesses lured by Amazon’s foothold in Arlington may be enticed to set up shop in new and emerging developments in Reston around the Silver Line.

“It is going to be a prime opportunity to relocate here in an area that’s new and right on the Silver Line,” Ingrao told Reston Now.

Additionally, limitations in the amount and affordability of housing stock in Arlington could push some employees and residents to find housing in Reston’s transit station areas, which are in the process of major transformation and redevelopment. The move could also diversify Reston’s workforce, Ingrao said.

But the move is not without challenges, ushering in associated concerns about infrastructure and transportation impacts that have long plagued discussions about future development in Reston.

Ingrao is optimistic that the coming of tech giants like Amazon will help expedite county and state discussions about needed transportation infrastructure improvements and encourage officials to tackle them in a “more direct way.”

“At the end of the day, it should force local government and others to really concentrate on the infrastructure needs and get them addressed sooner rather than later,” Ingrao said.

Here’s more from what county officials and business leaders are saying about the decision.

“Having HQ2 in Northern Virginia will bring important jobs, business diversity and more innovative technology to the area,” said Gerald Gordon, president and CEO of the Fairfax County Economic Development Authority. “We look forward to continuing to work with Amazon Web Services to expand its presence here and are excited to collaborate with other innovative companies that will be putting down roots in Fairfax County soon.”

“We congratulate Arlington and Alexandria on being selected in the process for Amazon HQ2,’ said Buddy Rizer, director of Loudoun Economic Development. “We consider this a win for the entire region. Many of Loudoun’s highly educated professionals will join the Amazon workforce, and many of Loudoun’s wine country and other retail and recreation venues will become favorite destinations for Amazon employees throughout the Northern Virginia/DC Metro region. We will continue to market Loudoun County as a world-class location for global businesses like Amazon, and we look forward to making some exciting announcements about new Loudoun companies soon.”