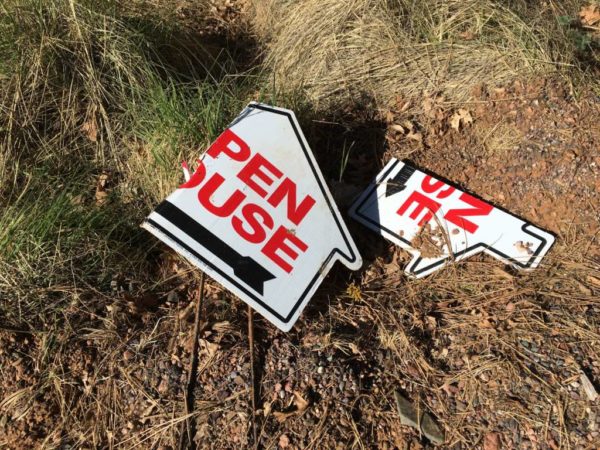 Fairfax County Government is currently mulling over changes to its sign ordinance that has everyone from schools and parks to local realtors concerned.

At a Planning Commission meeting last night (Wednesday), the commission deferred a decision on the new sign regulations until Jan. 16 to allow for more discussion on the impact of the ordinance.

Currently, county staff are reviewing changes to the zoning ordinance to make the language content-neutral. The change is in response to the United States Supreme Court’s 2015 ruling in Reed vs. Town of Gilbert, which ruled that localities that define sign categories based on the message expressed, or content-based, is unconstitutional unless it furthers a compelling governmental interest.

Rather than allow free reign for Fairfax residents of businesses to erect signs regardless of content, a proposed amendment would clamp down on sign regulations across the board.

Changes to the sign ordinance are widespread but often minor corrections. One of the biggest changes is that one freestanding building identification sign is permitted for each detached building and such signs must be limited to identifying the name of the building or the individual enterprises located therein, the address, trademark or identifying symbol of the building occupant.

According to county staff, minor signs (formerly referred to as temporary signs) were the largest challenge in the zoning ordinance rewrite.

“While staff acknowledges that the proposed language could negatively affect some developments that are currently exempt from regulation, we continue to recommend the language found in the draft text as it provides the closest level of regulation as the current provision.”

A representative from real estate investment company Macerich said at the meeting said the company had a laundry list of concerns but has been working with county staff to whittle those issues down. Another local realtor at the meeting said the new ordinance could push the open house signs and corner signs off of local lawns and into the already crowded right-of-way spaces.

The sign ordinance changes sparked concern with the inclusion of language that would remove government exemptions from sign ordinances.

“Staff has received comments from both Fairfax County Public Schools (FCPS) and the Fairfax County Park Authority (FCPA), neither of which is in favor of eliminating the current exemption status. Of particular concern to the Park Authority is the limitation on the size, number and location of minor signs permitted for non-residential uses in a residential district. These signs are used to announce summer concert series, camps and other activities at the parks. The schools have raised concerns with the proposed height of permitted freestanding signs for non-residential uses in residential districts which is proposed to be limited to 8 feet in height.”

As a result, staff said at the Planning Commission meeting that there would be modifications to the ordinance allowing some exceptions for schools and parks.

Planning Commissioner Phillip Niedzielski-Eichner said at the meeting he was generally in favor of holding Fairfax County government accountable to many of the same sign regulations as the public.

“There’s something to be said with us being able to model our behavior consistent with what we expect from the private sector,” said Niedzielski-Eichner. “There is a different benefit to be realized to the public with the park authority and public school [having] latitude with signs, but frankly I’m comfortable with them doing it within a regulatory context… not unfettered.”