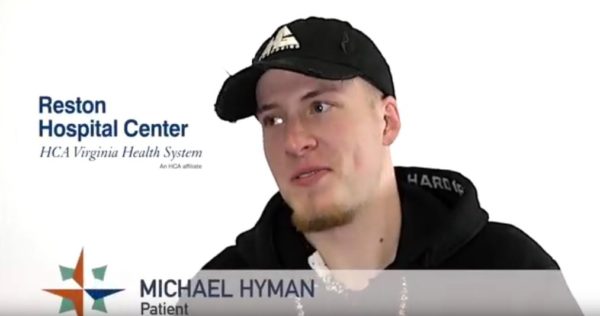 Most of the Fairfax County crew and Reston Hospital Center hospital staff who treated a motorcyclist critically injured from a 2017 collision had a reunion on Wednesday at the hospital.

Crews responded to a call for a collision involving a motorcycle and a car on April 27, 2017. When they arrived on the scene, they found that Michael Hyman, the motorcyclist, was critically injured, according to a Fairfax County Fire and Rescue Department post.

Our firefighters and paramedics knew time was of the essence. They exhibited excellent teamwork assessing and treating the patient. Medic 416’s time on scene was six minutes before they were off to the trauma center at Reston Hospital.

The crews thought they had done they best they could to give the young motorcyclist a chance to survive. That said, many thought the young man may not make it. As with many critical medical or trauma calls, our personnel deliver the patient to the hospital not ultimately knowing the outcome for that patient.

Hyman, the Fairfax County crew and the hospital staff went over the details of what happened to Hyman on-scene and at the trauma center, along with the treatment, recovery and physical therapy processes Hyman went through.

“He had extensive injuries that none of us had really seen before,” Liz Klemens, a nurse at the hospital, recalled in a Reston Hospital Center YouTube video.

Some of his injuries included a fractured a segment of his spine in his neck, a broken right arm, a snapped femur in his left leg, broken bones in his ankles and three to four places broken in his hip and pelvis.

Hyman now has a metal rod from his shoulder to elbow in his right arm, which he can’t move due to stretched nerves. He also cannot feel anything in his right hand.

The Dec. 5 evening ended with Hyman and his mother, Kim Hyman, thanking the firefighters, paramedics and hospital staff involved in his care.

Crews thought they had done they best they could to give the motorcyclist a chance to survive. Many thought the young man may not make it. Last night at @Reston_Hospital , most of the crew who treated that young man learned what happened to him. More: https://t.co/OMfIG492Qb pic.twitter.com/SLMqHJJuda