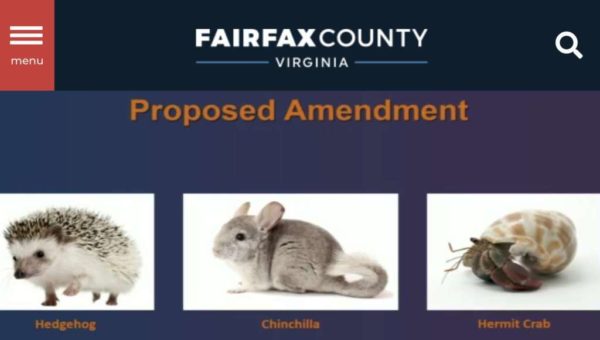 Chinchillas, hedgehogs and hermit crabs are one step closer to legalized pet status in Fairfax County.

The Fairfax County Planning Commission last night (Dec. 6) approved changing the definition of commonly accepted pets to include all three.

“All those hedgehogs in Fairfax County are extremely happy tonight,” Chairman Peter Murphy, who represents the Springfield District, said after the vote.

Strandlie said that while she supports chinchillas and hermit crabs as pets, more input from professionals is necessary regarding hedgehogs.

The increasing popularity of chinchillas, hedgehogs and hermit crabs as pets in recent years spurred the proposed amendment to the county’s zoning ordinance, according to the proposal.

Arlington and Loudoun counties allow hedgehogs and chinchillas as pets, with Loudoun County also permitting hermit crabs. Fairfax City and Falls Church either do not allow or remain unclear about the legality of the three animals as pets.

The commission tackled health and safety concerns mainly around hedgehogs as pets at a public hearing last Thursday (Nov. 29), deferring a decision to last night at the request of Mary Cortina, an at-large member of the commission.

Some of the concerns that came up involved hedgehogs’ ability to spread salmonella and how well owners can care for hedgehogs, given their high levels of maintenance.

Hedgehogs are nocturnal animals that require space, exercise and room temperatures above 70 degrees Fahrenheit to ensure they do not start hibernating, according to the Hedgehog Welfare Society.

Hart said he concludes that hedgehogs still fall under the “exotic pet” definition based on the temperature requirements raised during the testimonies last week.

Addressing the salmonella concerns, Ulfelder said that other animals, such turtles, can spread the bacteria.

For him, the prickliest issue concerned animal welfare. “It is true these animals are a little bit difficult to take care of,” he said. “I think for people who are up for that, they can be very nice pets.”

Strandlie praised a student from Longfellow Middle School in Falls Church, who argued at the public hearing in favor of legalizing pet hedgehogs.

The student, who said he has cared for his turtle for eight years and his monitor lizard for two years, said he believes hedgehogs are easier to care for than reptiles, based on his research. If the county approves the amendment, he said he would get a hedgehog.

Even though Strandlie voted “no,” she said the student probably persuaded some of the commissioners to support the proposal.

Fairfax County’s Board of Supervisors authorized a public hearing at 4 p.m. on Jan. 22 to consider the controversial proposal.

“I think we should be allowing people if we can — if they have the ability — to have hedgehogs as pets,” Ulfelder said.