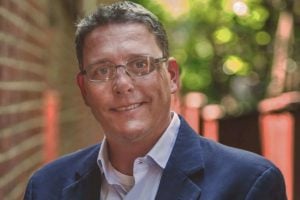 Chad Thompson, a public affairs consultant who lives in Herndon, announced today (Dec. 11) that he will vie for the Virginia House of Delegates seat representing the 86th District, which includes Herndon.

Del. Jennifer Boysko, who currently represents the 86th District, announced last month plans to run for the State Senate seat to replace Congresswoman-elect Jennifer Wexton. The special election for that seat will take place on Jan. 8.

Thompson and his wife Elizabeth, a pre-school teacher at Floris United Methodist Church, live in the Floris community of Herndon with their four kids, aged 8 to 12.

Thompson points to education, transportation and the environment as a few of the reasons why he decided to seek the Democratic nomination in the Firehouse Primary.

“I got into this race because as a parent I care about the type of community we build for our children,” Thompson said in a press release. “Investing in our children, finding real transportation solutions and building Virginia’s renewable energy future are the foundation for growing our community and our economy.”

Thompson faces other Democratic contenders for the seat, including Kofi Annan and Ibraheem Samirah. 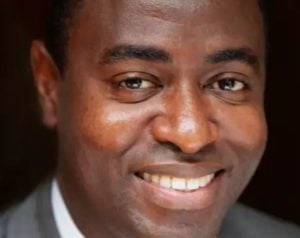 Annan, who has lived in Herndon since 2012 with his wife and two teenage sons, is the president of the Fairfax County NAACP.

Annan and his wife started a rental property business in 2009 and founded the Veteran Career Counseling Services LLC, which remained in operation from 2012 to late 2018, to help more than 700 veterans find employment after transitioning out of the military, according to a fundraising page. 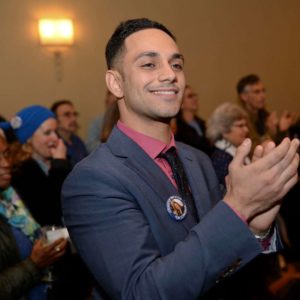 Samirah is a first-generation Muslim American who is the son of Palestinian refugees. He was separated from his father in middle school when his father was barred from re-entering the U.S., according to his campaign website.

Samirah is currently a dentist at District Smiles, according to his LinkedIn profile.

Photos via Chad Thompson campaign, Samirah for Delegate/Facebook and crowdpac.com.