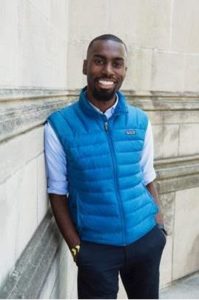 The Reston Community Center recently added the civil rights activist to its lineup for the three-day event, which takes place from Jan. 19 to Jan. 21.

Mckesson is an organizer, activist and author of “On the Other Side of Freedom: The Case for Hope,” which debuted in September. He has focused on confronting the systems and structures behind mass incarceration and police killings of black and other minority populations, according to his bio.

He will deliver this year’s keynote address at noon on Jan. 21 at RCC Hunters Woods. Afterward, attendees can enjoy a family-style community lunch in RCC’s Community Room. Following the lunch, Mckesson will sign copies of his book, which will be available for purchase.

RCC’s Executive Director Leila Gordon said Mckesson’s own experiences will inspire his call for others to tackle issues “with integrity, commitment and awareness.”

“DeRay Mckesson speaks with urgency and the poignancy of his own lived experience,” Gordon said in a press release “He is among the new wave of leaders emerging to tackle the persistent issues of injustice, inequity and racial disharmony that infect and poison the American experience.”

Tickets for the lunch and keynote address cost $5 for Reston residents and employees.