(Updated at 5:12 p.m.) While kids were off from school during winter break, Langston Hughes Middle School (11401 Ridge Heights Road) kicked off 2019 with renovations as a part of its planned expansion.

The first move of the school’s renovation took place during winter break, Principal Aimée Monticchio wrote in an email to the school community today (Jan. 4).

“We look forward to a new, modern and larger building after the renovation,” she wrote. 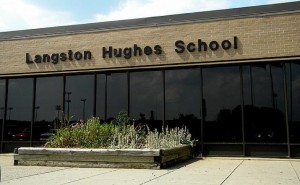 Originally constructed in 1979, the expanded school is set to be 189,000 square feet and serve 1,250 students, according to Hughes Group Architects.

The $39 million improvement program will be done in phases with the occupied construction project spanning five phases across three years.

The project includes a central court called the “Hall of Nations” — a collaborative and flexible space meant to serve as an auditorium, a classroom or a breakout space.

The project also includes renovating the cafeteria and adding a new dining courtyard.

Construction is estimated to be completed in 2021.