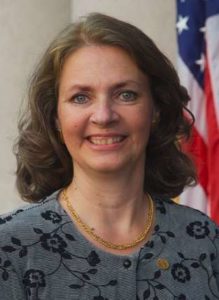 Connie Haines Hutchinson, a former vice mayor of the Herndon Town Council, is joining the race for the 86th District seat, which represents Herndon and parts of Fairfax and Loudoun counties.

Hutchinson is running on a campaign to improve education, revamp transportation, lower medical costs and ensure Northern Virginia gets support from the Commonwealth.

Ever since she ran for the Herndon Town Council in 1990, Hutchinson said she is dedicated to “give my time and talents to improve the quality of life in my hometown,” according to her website, adding that her seven terms on the council gave her the background and knowledge to represent the area in the Virginia House of Delegates.

Hutchinson, who claims that her main issues are nonpartisan, decided to run as an Independent for the 86th District seat because elected officials in Herndon run as Independents “in order to allow cooperation and collaboration without divisive party politics,” her website says.

Currently, Hutchinson is the general manager at The Borenstein Group, according to her LinkedIn. She is also the treasurer of the Herndon Hospitality Association, a nonprofit she founded to assist Herndon’s hospitality industry.

Previously, she has served on the Virginia Municipal League’s Legislative Committee and was the president of the Dulles Area Transportation Association.

In 1992, she became a member of the Herndon Town Council, and she served as vice mayor during the 2008-2010 term and again in 2012-2014. Prior to that, Hutchinson served on the town’s architectural and heritage preservation review boards.

She has also been involved with the Optimist Club of Herndon, Herndon Recreation, Inc., Herndon Youth Soccer and the parent-teacher associations for Herndon Elementary School and Herndon Middle School.

Hutchinson is a Herndon native, and her four children attended Herndon schools, according to her website.