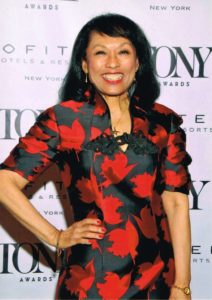 Baayork Lee, an actress, singer and dancer, is coming to the Reston Community Center to talk about her career this Saturday (Feb. 9).

Born and raised in New York, Lee started dancing at a young age. At the age of five, she had her Broadway debut in “The King and I.”

She has appeared in the original company of George Balanchine’s “Nutcracker” and starred in the original production of “A Chorus Line.” Lee has been active in the D.C. area, from directing “Carmen Jones” at the Kennedy Center to being a resident choreographer for the Washington National Opera for 18 years.

Now, at the age of 72, Lee is slated to direct and choreograph “South Pacific” for City Springs Theatre Company in Sandy Springs, Ga. later this year.

Lee will talk about her career, the state of Broadway today and her work with the National Asian Artists Project, a nonprofit which showcases works by artists of Asian descent, at CenterStage (2310 Colts Neck Road).

She is set to take the stage at 8 p.m. Tickets cost $15 for Restonians and $20 for everyone else.