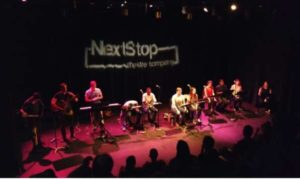 NextStop Theatre Company is rolling out a new program to strengthen the network of D.C.-area playwrights.

“I have long aspired for NextStop to get involved in developing new work,” NextStop Theatre Company’s Artistic Director Evan Hoffman said in a statement. “But I wanted to start by consulting with playwrights. I wanted to find out how we could best serve them and their creative process.”

Hoffman says that playwrights often say they face two challenges. “They lamented that the writing process can be very lonely work and that finding the people and space to gain objective feedback is daunting,” Hoffman said. “It is my hope we can help to ease both of those struggles through this program.”

The program has two components.

First, the theatre company will host an inaugural “Playwrights’ Mixer and Pitch-fest” on March 23. NextStop Theatre Company plans to invite 30 local playwrights network with each other and local directors and producers before each playwright pitches their work to the group.

After the event, playwrights in attendance will have the opportunity to complete a survey about the pitches, which will help NextStop Theatre Company select the works for a series of free staged readings. The theatre company plans to have professional actors and directors take part in the developmental readings, which are slated to take place over six months.

The Playwrights’ Initiative is partly funded by a grant from ArtsFairfax.