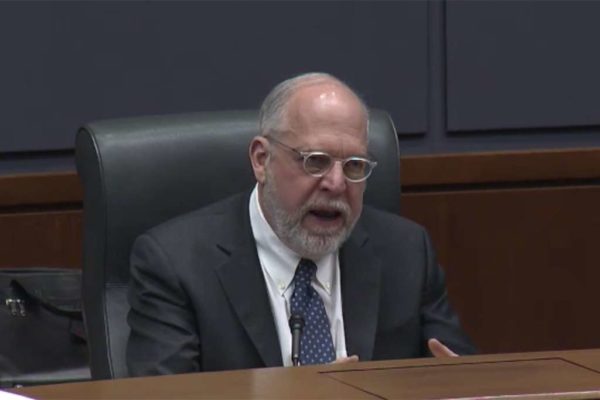 Fairfax County’s Planning Commission finally weighed in on a controversial zoning ordinance proposal for Reston by recommending that the county’s Board of Supervisors deny the specific proposal, yet take steps to resolve PRC issues with the use of a taskforce.

The zoning ordinance would increase the maximum allowed population per acre in the Planned Residential Community (PRC) district — Reston’s primary zoning district — from 13 persons to any number up to 15, along with allowing residential development at a density of up to 70 dwelling units per acre in certain areas.

Vice Chairman and At-Large Commissioner James Hart, the main person leading the proposal, gave a lengthy speech before the commission voted and approved his motions on the proposal. “We are close to the PRC cap, but the level of pushback we have received has confirmed to me it’s the wrong way to do this amendment,” Hart said. “We owe it to the citizens to try.”

Hart added that inflexibility around the PRC cap “is highly problematic.” His vision for resolving the PRC issue involves recoupling the planned number of village centers and the density cap.

The Planning Commission approved all of Hart’s recommendations to the Board of Supervisors, which include directing the board to:

If the Board of Supervisors follows the Planning Commission’s recommendations, Hart said he sees two options for future development once the cap is hit on PRC: if applications want to be zoned as PRC, the staff can ask for incremental increases to the PRC cap on a case-by-case review with analysis of each application or applications will zone out of PRC and will need to come in as similar categories — such as Planned Residential Mixed-Use (PRM).

“Either way, those applications can continue,” Hart said.

Hart also tried to tackle the controversy surrounding the proposal, saying that “an unusual amount of misinformation and confusion” from freelance experts helped fuel the concerns. “All of that antidevelopment frustration was focused on this particular amendment,” he said.

He took the time to debunk some of that misinformation he had heard, which included saying that the proposal would not increase the density for Reston overall. He also pushed back on criticisms that said there are no plans for infrastructure to support the proposed PRC changes, reminding locals that because Virginia is a Dillon Rule state, the process of securing infrastructure requires an ongoing basis. “It’s rude to claim that nothing is being done,” he said.

Hart said that he wants to see locals stay engaged in the land use process, which he argued keeps the process grounded in reality. He also thanked the citizen groups and individuals who testified at public hearings and have sent in comments on the proposal.

The PRC decisi0n was the last one the commission tackled before the meeting ended shortly before 9 p.m. with a round of applause from the audience.