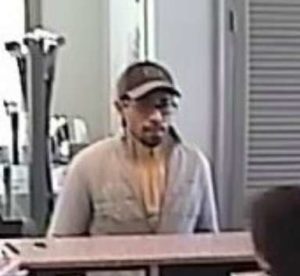 The Fairfax County Police Department is seeking the public’s help to identify a man suspected of robbing the BB&T Bank on Fox Mill Road yesterday.

The police department released a photo of the suspect today (Feb. 22).

Just before 2:30 p.m. yesterday (Feb. 21), a man entered the bank (2513 Fox Mill Road), implied he had a gun and demanded money, according to the police report. He was given cash and then fled on foot.

“The suspect is described as light-skinned, 20 to 30 years old, 5’8″ tall, thin build, wearing a dark gray shirt, light colored jacket and a gray cap,” according to the report.

Police arrived on scene and searched the area, according to the report. No one was injured.

Anyone with information about the incident should call the police department at 703-246-7800.

More Stories
‘The Wolves’ and More This Weekend in RestonReston Then and Now: Tall Oaks Village Center