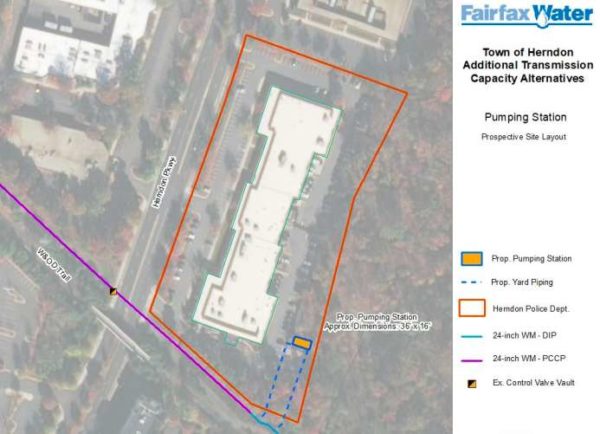 The Fairfax County Water Authority will begin an engineering study to determine how to boost the water supply for the Town of Herndon after the Herndon Town Council approved the $107,000 study last night (May 28).

Tammy Chastain, deputy director of the town’s public works department, said additional capacity is needed to meet future demands. Discussions on how to boost water supply with a new point of supply and install a new pumping station have been underway since at least 2016.

“We knew we were going to have to find it from somewhere,” Chastain told council members last night.

Initially, town officials thought the project would cost around $6.1 million, but now, costs could be as low as $3 million for design and construction.

The pumping station, if approved, would be located at the Herndon Police Department. Because the station would be near a transmission main and meter vaults along the Washington & Old Dominion Trail, the cost of the project is expected to be much lower than anticipated.

Funding for the study was planned for in the town’s five-year capital budget. The town’s 2016 Water Utility Master Plan calls for the design and construction of a new water main before 2025.