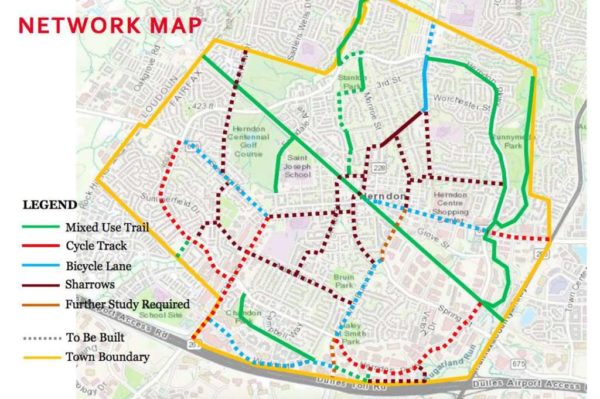 The Town of Herndon is in the process of drafting its first bicycle master plan, which lays out a longterm plan for bicycle route locations and a vision for the town’s bicycle network.

The plan, which was discussed by the town’s Planning Commission at a meeting earlier this week, intends to promote cycling as an alternative mode of travel and improve connectivity for cyclists.

The plan notes that Herndon’s population density is high in comparison to other suburban communities. As expected redevelopment around Metrorail stations and downtown Herndon continues, town officials say they will need to better incorporate bicycle facilities in the town.

The current plan builds on the 2012 Fairfax County Bicycle Master Plan, which was endorsed by the Town Council and the town’s Pedestrian and Bicycle Advisory Committee (PBAC).

Once approved by the Town Council, PBAC will evaluate the implemented of the plan on a yearly basis.

Currently, the town has nine active bicycling-related projects, including:

Much of the plan’s success will depend on whether or not bicycling is seamlessly incorporated into the county’s existing and future infrastructure, as well as a balanced approach to transportation infrastructure improvements for pedestrians, bicyclists and drivers. The plan suggests adopting a “complete streets” policy in order to guide decisions on the planning and design of infrastructure projects in the town.