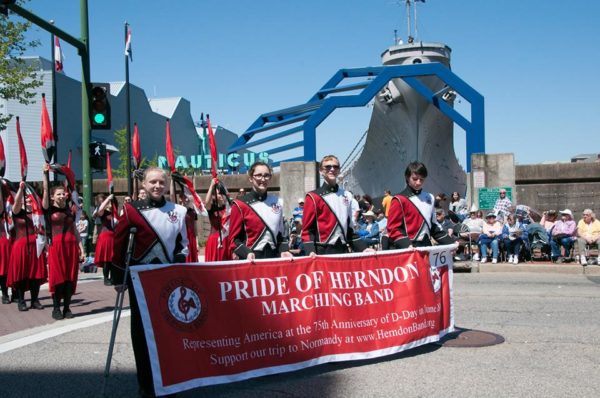 Herndon High School’s band took part in the 75th anniversary of D-Day celebrations in Normandy — returning with enhanced appreciation of the crew members who served on the USS Herndon during the invasion.

Several students dressed in original uniforms worn by USS Herndon sailors and the band also took a flag that flew on the USS Herndon.

Band members marched through the American Cemeteries in Brittany and Omaha Beach and performed in the D-Day Musical Salute to Liberation.

Varun Natarajan, a Herndon High School junior and a member of the band, said the experience increased his appreciation for those who sacrificed their lives during the invasion, as well as the unique role the USS Herndon played.

“We heard some very impactful speeches by people who participated in D-Day. Hearing the veterans describe D-Day gave me a new sense of perspective on what the invasion was like, and how intense the fighting was. Three students from our school also got to speak about what this means to them,” Natarajan said.