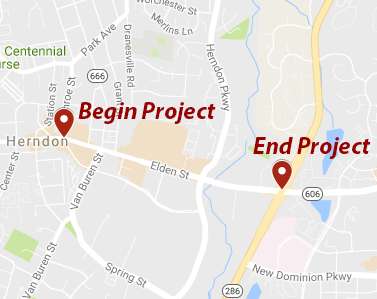 A major project to widen Elden Street from four to six lanes between Herndon Parkway and Fairfax County Parkway will likely break ground in early 2023.

The project is expected to cost roughly $51 million, including $6 million for preliminary engineering, $20 million for right of way acquisition and utility relocation, and nearly $25 million for construction.

A spokesperson for the Virginia Department of Transportation said that the state is currently in the process of right of way acquisition. Construction could begin sooner if additional funding becomes available.

Culverts over Sugarland Run will be replaced, along with a new bridge to improve stream flow and reduce potential flooding. So far, the project is on track.