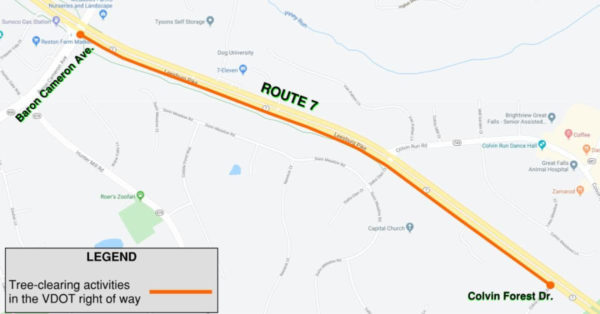 For the next month, drivers can expect changes to their weekday commutes along Route 7 in Reston.

Beginning around Jan. 27 until the end of February, drivers can expect shoulder and single-lane closures from 9:30 a.m. to 3 p.m Monday-Thursday and from 9:30 a.m. to 2 p.m.on Fridays, according to a press release from the Virginia Department of Transportation.

During this time, crews will be working between Baron Cameron Avenue and Colvin Forest Drive to clear shrubbery and foliage from the east-bound right of way, the press release said.

The work will prepare for an implementation of a shared-use path, more lanes and intersection improvements along Route 7, according to VDOT.

The speed in the area will be temporarily reduced to 45 miles per hour between Reston Avenue and Jarrett Valley Drive until the work on the roadway is finished.