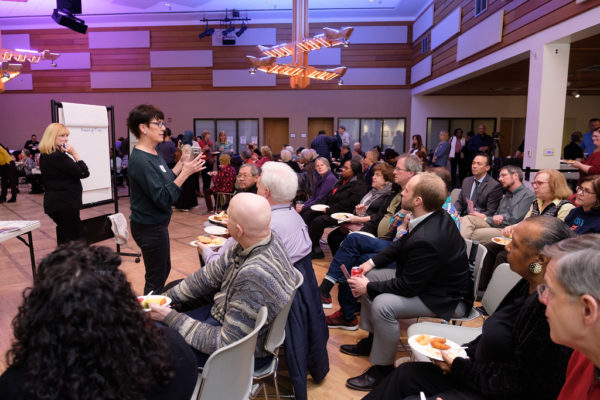 This op-ed was jointly submitted by Reston Community Center’s executive director Leila Gordon and Beverly Cosham, chair of the Board of Governors. It does not reflect the opinions of Reston Now. We publish articles and opinion contributions of specific interest to the Reston community. Contributions may be edited for length or content.

The Reston Community Center Board of Governors and staff want to express their appreciation to the nearly 200 people who came out on a cold and rainy February Monday to contribute their ideas about RCC’s future.

The event was designed to begin a conversation that the Board and staff will be having with and throughout the community for the next several months as we explore the development of a new strategic plan to take effect in 2021. A film by Storycatcher Productions about Reston Community Center’s past, how it fulfills its mission and what it seeks to be in the future, was screened. It will continue to be refined, and then posted to RCC’s YouTube page with other RCC video stories and Board of Governors meetings. A film summary of the February 10 “RCC: Past and Future” event will also be posted.

Following the film, Dr. Kara Fitzgibbon, director of the University of Virginia’s Center for Survey Research, presented findings from RCC’s 2019 Community Survey that UVA conducted. The full report, including the data appendices, is posted on the Reston Community Center website:  http://bit.ly/RCCSurveyReport. As Dr. Fitzgibbon noted in her presentation, the data collected is extensive and will be a foundation from which RCC can explore strategic planning priorities to serve Reston effectively and efficiently.

The energetic conversation in the RCC Community Room that followed the survey report-out composed the second half of an energizing evening. Yes, the noise level grew challenging and there were too frequent interruptions; but the amount of positive energy and creativity that flowed was very impressive, nonetheless. The comments shared with the Leadership Fairfax facilitators from all the people eagerly offering them will be compiled and presented to RCC Board and staff teams. More meetings with smaller groups and more individualized focus areas will take place.

Even with the abundant creativity and breadth of feedback received on February 10, there is still a lot of discovery to come. RCC will engage with the community in meetings on each individual strategic plan pillar to delve more deeply into the topics to get greater focus on various aspects of each. Pursuit of new facilities always necessitates lengthy investigation – not only to find out if there is support for a new building, but also what the ramifications are financially, what program elements should be served, how new facilities should function and by whom they should be operated. RCC is at the beginning of that exploratory process. Similarly, new programming, pricing, communications platforms and tools – all these pillars of RCC planning will require further conversation and research.

Participants who registered for the February 10 event will be contacted if they left questions to be answered, and they will be invited to continue their involvement as RCC plans meetings for the months to come. People who want to join the conversation will be welcome – news about meetings will be posted and advertised.

The beginning of RCC’s future is off to a great start; thank you for joining the conversation.

END_OF_DOCUMENT_TOKEN_TO_BE_REPLACED

More Stories
After Delays, CVS Pharmacy to Open in Reston Station on March 1Pet of the Week: Abby