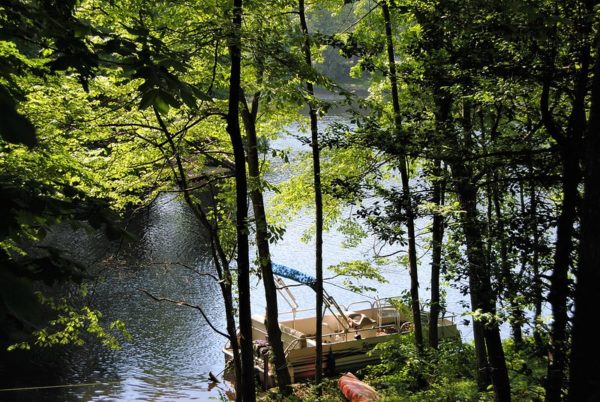 Update: The story was updated to include Reston Association’s comments on the issue.

While the letters are intended to enforce RA’s boat rules regarding sizes, some boat owners say they’re being unjustly threatened to comply with rules that RA has not enforced consistently in the past. In some cases, boats are one-quarter of an inch larger than what is allowed.

In response to a request from Reston Now, Reston Association said it is working with boat owners to address concerns on a case by case basis.

“We recognize the recent letter sent to those 50 members may have created some confusion but the association is looking forward to work with each of these members to satisfactorily address their concerns,” the statement said.

Cris Revaz, who owns a boat on Lake Audubon, says he made sure he ordered a boat that was allowed by RA when he moved three years ago.

This year, he received a letter from RA’s General Counsel stating that his boat was oversized and offered to enter into a written settlement as a covenant against his property to continue using the boat.

His boat is half an inch longer than what is allowed, Revaz said.

“This is the kind of mindless bureaucratic interference with people’s lives that gives government a bad name. Is there not something better the Reston Association should be doing with their time than engaging in such frivolous enforcement actions?” he said.

Inder Sud, who has lived in Reston since 1973, said he was shocked to receive the letter from RA concerning the boat he’s had for more than 25 years. Sud said he has paid annual permitting fees for the boat, which is a quarter-of-an-inch larger than the 18′ by 10′ requirement.

“Surely RA staff should be able to exercise some reasonable judgment. Before issuing such notices,” Sud wrote in an email. “Is it really worth RA resources to. Have your staff enforcing such minor variations?”

Others like Jill Norvell said they received a similar letter concerning two boats they’ve had for eight years and 20 years. In the past, they’ve received no enforcement letters and have paid annual permanent mooring fees as required.

Residents say that RA should consider grandfathering all current boats, unless they have major compliance issues and focus on new boats in the area.

Here’s more from RA on the issue:

The Reston Association Board of Directors and staff are required to enforce all Deed requirements approved by the association’s 21,000 members. Included in the Deed are specific boat size requirements for the use of Reston’s lakes. Recently, 50 members received individual letters from RA indicating their boats do not conform to the Deed specifications. RA is in the process of making some adjustments to the measuring process which will remove some of the boats from their current non-conforming status. The association is also working with those affected boat owners that remain outside the approved measurements to memorialize an agreement between the parties that will effectively grandfather the existing non-conforming boats for the current homeowners. Should the property convey at some future time, the current owner would need to bring the boat into compliance with the deed requirements or have the boat removed from the lake.