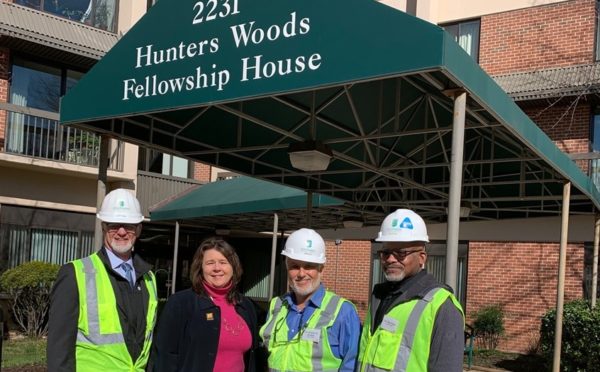 Work is now underway on the $12 million renovation for the Hunters Woods Fellowship House in Reston.

The groundbreaking took place on Thursday (Feb. 27) for construction on the building (2231 Colts Neck Road), which serves as low-income housing for more than 300 seniors, according to a press release. All of the residents have a yearly income of roughly $12,000.

Fellowship Square Foundation, a nonprofit organization that provides affordable housing and other services in the area, have several planned changes to update the 225-unit facility.

The project will include new flooring, finishes and lighting; an update to a game room; a new lobby; updated landscaping and exterior; improvement of energy efficiency; and other features to help battle resident loneliness, the press release said.

“Here in Northern Virginia, we have nowhere near the level of housing for low-income seniors that we need, and this trend will only grow worse with the aging of baby-boomers and expanding redevelopment projects that drive prices up,” Christy Zeitz, the CEO of Fellowship Square said.

Renovations are expected to be completed in 2022 and will take 18 months, according to the press release, which added that this is Fellowship Square’s second “major” project since it was built in 1979.