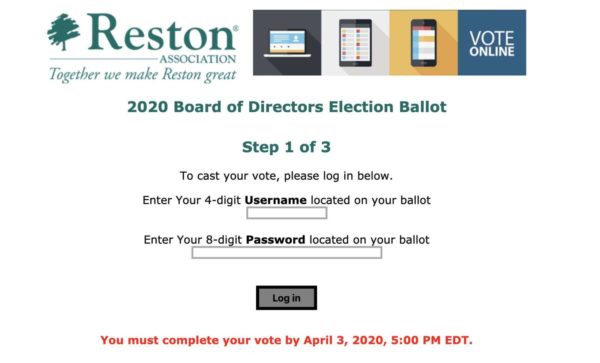 When 81 Reston Association members cast online ballots for the current board election on the first day of voting on Monday, they voted with incorrect ballots linked to other members.

The technical error prompted Intelliscan, RA’s independent election agent, to toss the ballots out and fix the issue.

“Intelliscan has since corrected the error and come up with a comprehensive plan to address those individuals who voted with an erroneous ballot,” said Mike Leone, RA’s spokesman.

Due to the botched ballots, Intelliscan has created a special log-in to verify the credentials of the 2,500 members who plan to vote online. Members must call Intelliscan to verify their credentials, after which the company will send a new voter link with the correct ballot to cast a vote. The company is also sending paper ballots to all members as a “safeguard.”

Both corrective actions are being administered at no additional cost to RA. The issue only impacted online ballots.

An alert to inform members of the technical error and apologize for the mixup has been sent to affected members. The email includes a link for members to cast their votes online.

“This process will ensure that RA members impacted will not be able to double vote,” Leone wrote.  RA says that the issue was a one-time error that has been resolved and will not impact the remainder of the elections.

Intelliscan said the issue was a technical error, as described by RA below:

This is not the first time RA board elections have had hiccups. Last year, technical issues caused roughly 2,800 paper ballots to be returns as undeliverable. Intelliscan resent the ballots to the correct addresses and moved to extend the voting period.

Anyone with questions about the issue can contact Intelliscan by calling 252-560-8079 or emailing Michelle McRoy at [email protected].