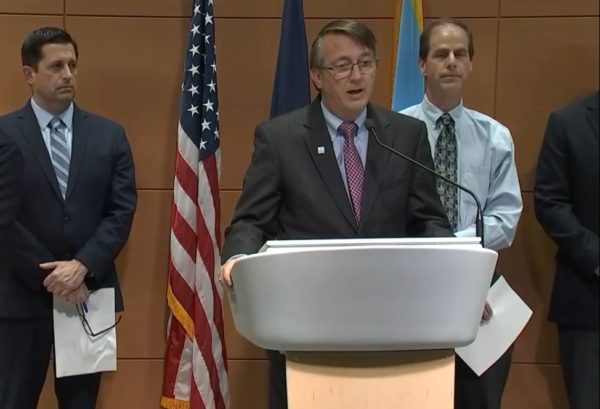 In a late-night decision, Fairfax County Public Schools will close today (Friday) and Monday off so staff can prepare for distance learning due to the recent spread of the coronavirus.

“During the past several hours we continue to hear genuine concerns from parents about keeping our schools open while the coronavirus response escalates around the country.  Schools are closing in Maryland and several other states and a state of emergency was declared in Virginia.  As a result, and in an abundance of caution, I believe it is prudent for FCPS to cancel school tomorrow to help ease parent, staff, and student anxiety,” Superintendent Scott Brabrand wrote in a letter to parents last night.

The change came just hours after Brabrand said at a press conference yesterday (Thursday) that schools are staying open because there is no evidence of “community spread” with the virus.

“FCPS takes very seriously the COVID-19 challenges that are before the community today,” Brabrand said, adding the school system is “working very closely” to monitor the virus with local public health officials.

In a tweet later that day, the school system reversed its decision.

All FCPS schools will be closed Friday, March 13, 2020.
School offices and central offices will open on time with an unscheduled leave policy in effect for 12-month employees. (Condition 2). More details to follow.

The school system was under growing pressure to close its schools due to concerns about the coronavirus outbreak.

“We woke up to have a neighboring school division close,” he said, referring to Loudoun County’s announcement that it will close its schools through March 20.

FCPS announced earlier this week that there is a plan with different scenarios for school closures.

“If we were to have a positive response, we would make a decision to close that school or schools were that was to happen,” he said today.

Brabrand added that the schools are undergoing “deep cleans” with a protocol confirmed by medical officials that “kills viruses, including COVID-19.”

As of 6:45 p.m. on Thursday, the Virginia Department of Health says that there are 17 cases in the state, with Fairfax County having the most.

“This is a very serious matter,” Board of Supervisors Chairman Jeff McKay said at the press conference. “We must accept this is a changing situation hourly.”

While county buildings will remain open, McKay urged people to do transactions online if possible.

Dr. Gloria Addo-Ayensu, the director for Fairfax Health, said the risk for the general public in Fairfax County is low.

“SACC centers will remain open,” FCPS said. “We will share with you updates about today’s decisions by March 31.”

FCPS said it a review is underway for the food service and food handling procedures and that several parent-teacher associations are canceling school-based events “due to anticipated low turnout.”

This story appeared on our sister site Tysons Reporter