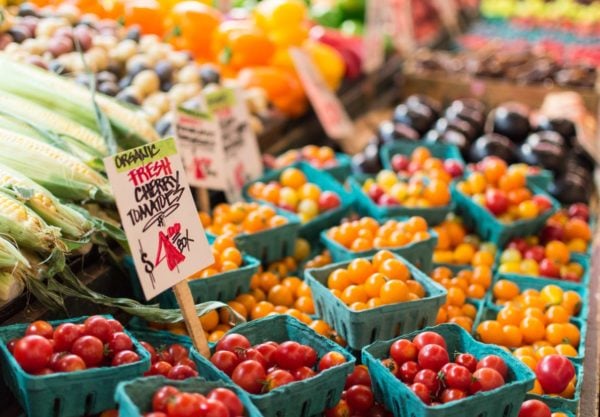 Spring is around the corner and farmers markets around the are preparing to open for the season — offering visitors an array of fresh vegetables, fruits, baked goods and other locally sourced commodities.

Reston Now rounded up a list of markets in the area so shoppers can plan ahead.

The Reston Farmers Market will open for visitors next month, on April 26, according to the Fairfax County website, which added the market will take place Saturdays from 8 a.m. until noon at 1609 Washington Plaza N.

For those who drive, the web page said parking will be available along North Shore Drive. A list of vendors from previous years can be found online.

Community Foodworks in Reston, which takes place at St. Johns Neuman Catholic Church (11900 Lawyers Road) is part of a larger network of markets around NoVA, which includes a location in Tysons. The Reston location set to open on April 17 and run through the end of November on Wednesdays from 3 to 7 p.m., the website said.

Shoppers can expect roughly 20 various local vendors to check out, each of which offers things ranging from dog treats to fresh pastries, according to the market’s website.

The Herndon Farmers Market will make its debut this year on April 23. It will be open every Thursday from 8 a.m. until 12:30 p.m. at 765 Lynn Street until Nov. 5, according to Fairfax County’s website.

The Reston Farm Market (10800 Baron Cameron Ave) isn’t a traditional farmers market– but is instead a seasonal family-owned and operated business that offers things similar to what someone would expect to find at a weekly farmers market.

The Weinstein family, who owns the market, announced on their website that it will open for the 2020 season this upcoming Monday (March 16).The daily hours of operation will be 9 a.m. until 8 p.m.