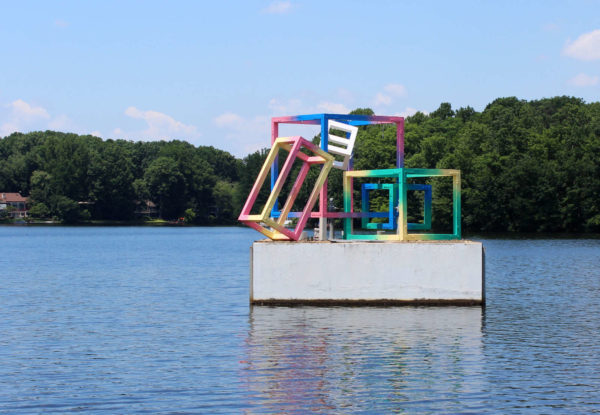 The public artwork titled “Spectrum” on Lake Thoreau Spillway will stay in place a little longer than originally planned at the request of local residents.

The piece was commissioned by Marco Rando, an art teacher at South Lakes High School along with his students and is a part of a  rotating annual project. Each updated piece of art usually stays up from July until the beginning of December, according to Anne Delaney the executive Director for Public Art Reston.

Now, the piece will be on display until the end of June, according to Delaney, who added that they plan to take down the piece before July 4 so it isn’t damaged by fireworks.

For now, Delaney said Rando hopes the artwork will help keep residents in good spirits despite the COVID19 pandemic.

“Spectrum” marks the sixth piece of art created by Rando and his team of students and the project is supported by Public Art Reston, which aims to engage the public and help foster a sense of community, the website said.

A petition led by residents earlier this year requested that the art project remain on the spillway for longer than originally planned.

“After two years of creating sculptures with strong conceptual origins that featured minimalist color palettes, STEAM decided to change direction and create a sculpture that prioritized an exploration of aesthetic elements over a representation of a tangible theme,” Public Art Reston’s website said about the piece.