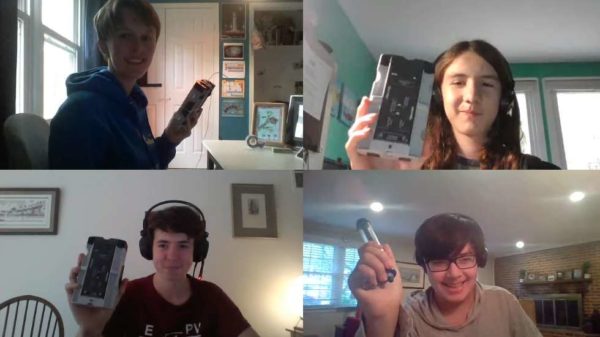 Ideaventions Academy in Reston is a private school that caters to students in grades four through 12 with an affinity for science and math, according to it’s Twitter page. But unlike Fairfax County, the academy had practice using a remote learning system that made the transition much easier for both the students and teachers, Juliana Heitz the school’s vice principal said.

In February, the school actually had a flu outbreak that forced students and teachers to set up a remote learning system through Google Meet for several days. Though inconvenient at the time, Heitz said it might have been a blessing in disguise since roughly 70% of the teachers were already equipped to host class digitally.

“We had three days of practice,” she said.” When we actually had to close, for coronavirus, it was more incremental. It was really about getting those last few teachers to go virtual.”

When COVID19 first broke out, the administration made the decision close Thursday (March 12) and the students began classes again on Monday (March 16), Heitz said, adding that this likely would not have been possible without the “test run” in February.

In addition to the practice, the teachers already had, Heitz mentioned that teaching virtually is also easier for Ideaventions Academy because they have smaller class sizes as well. “The class sizes are limited to 10 students,” she said, which makes online discussion easier.

To supplement the student’s education, even though they cannot be with their peers, they are required to go on daily walks and keep track of them in a log. When it comes to extracurricular, through the school had to cancel the school play, the kids are still staying active with hands-on activities such as science and art projects at home, according to Heitz.

For tests and such, Heitz said that the school is working with parents to proctor tests so students are still being held at a high academic standard.

Teachers also take daily attendance. “If they have a doctor’s appointment or something like that, the parent will still email us,” she said.

To avoid security issues that Fairfax County dealt with, the academy’s teachers were taught to invite students to the virtual classroom using an internalized email that students are given upon their enrollment, according to Heitz.