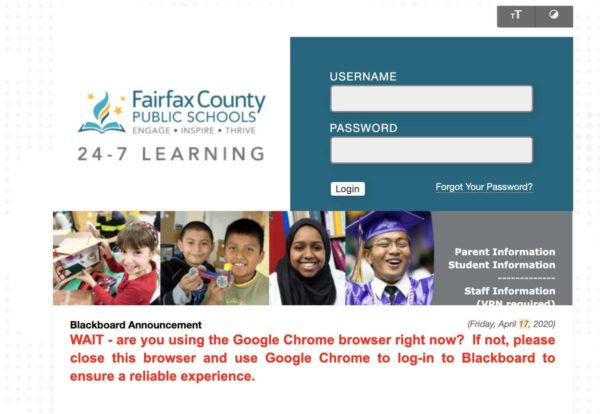 The rollout of the second week of distance learning by Fairfax County Public Schools continues to be wrought by challenges.

Earlier this morning, FCPS noted that many people are still having problems logging on the Blackboard Learn, the online system used for distance learning. School officials say that updates made by Blackboard over the weekend have not corrected delays with the system.

“We are aware that some students were able to access the 24-7 system early, however as the volume increased, we received word that access was intermittent or slow, in some cases requiring multiple log-on attempts. Once inside the system, Blackboard Collaborate worked well and that resource is continuing to be used by some teachers,” FCPS wrote in a statement.

The Fairfax County School Board is expected to receive an update on the rollout of distance learning on Thursday (April 23). The virtual meeting begins at 10 a.m.

Last week, FCPS canceled distance learning because of major failures with the system. Students and teachers were unable to log on and teachers felt they were unprepared to log in.

The school system’s top leadership officials conceded that the rollout of the plan was a failure and apologized for missteps. They also noted that the school system did not implement seven recommended upgrades to the software over the last two years.

A recent Washington Post story shed light on major security problems that occurred last week. Students appeared on-screen naked and flashed weapons while other chats were hijacked by racist, homophobic and inappropriate language, according to the story.

The story also flagged delays in the rollout of distance learning, which took roughly four weeks, including spring break:

In staff meetings held in late March, teachers suggested using programs such as Zoom to facilitate face time with students, according to educators, many of whom spoke on the condition of anonymity to avoid retribution. But those ideas were shot down by higher-ups, who cited concerns about security.

That anxiety was well-founded: Schools across the country have fallen prey to “Zoom bombing,” a phenomenon in which anonymous users disrupt online classes with hateful rhetoric or sexually explicit images. Nonetheless, Zoom and popular platforms like it had helped school districts, businesses and even families get connected quickly during a time of upheaval.

Fairfax settled on a solution many were less excited about: online learning tools offered by Blackboard. Caldwell said the division has a contract with Blackboard for $2.6 million in 2020, which includes an extra $150,000 per month that the division agreed to pay the firm during the shutdown.

In interviews, teachers described Blackboard as a lumbering program that they found more difficult than other technologies and more likely to malfunction. The school district was planning to switch to another online platform, Schoology, in 2021, Caldwell said.

A community petition to hold FCPS “accountable for educating our kids during [a] pandemic” has received 937 of the 1,000 needed signatures. The petition calls for an independent audit of decision making and events prior to the rollout of distance learning.