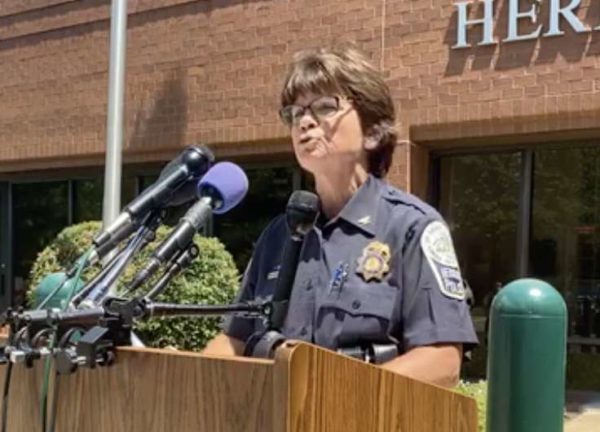 Herndon Police Chief Maggie DeBoard is disputing allegations that an officer incorrectly filed a report stating that a student from Herndon Middle School instigated a fight on a school bus last year.

Fairfax County’s NAACP alleges that the 12-year-old student was a victim during the fight between another 13-year-old-student. At a press conference earlier today, Sandra Barksdale, the mother of the student, said video from the school bus corroborated her allegations.

Barksdale said the school administration and officer, who also works with School Resource Officers, failed to handle the incident over the last several months. Her son is Black and the other student was white.

But DeBoard vehemently defended the SRO in a press conference at 2 p.m. today.

Although she had not seen the video referenced by the Fairfax County NAACP, DeBoard said the officer’s police report, eight witness statements from middle school students, and other evidence indicated the student started the fight.

“Quite frankly, I could not be more disappointed and more outraged to further a false narrative that does not exist,” DeBoard said.

Fairfax County NAACP President Sean Perryman said it was “extremely telling” that DeBoard admitted to not watching the video, which forms the basis of the allegations.

“This is because the report bears no resemblance to the video of that incident,” he wrote in a statement.

Barksdale also alleged the SRO was combative and unprofessional during later interactions following the Sept. 20 incident.

DeBoard maintained her defense of the SRO, adding that the police department did not criminalize the child.

“It is false allegations that hinder our ability to make progress,” she said.

Neither student was prosecuted in the case.