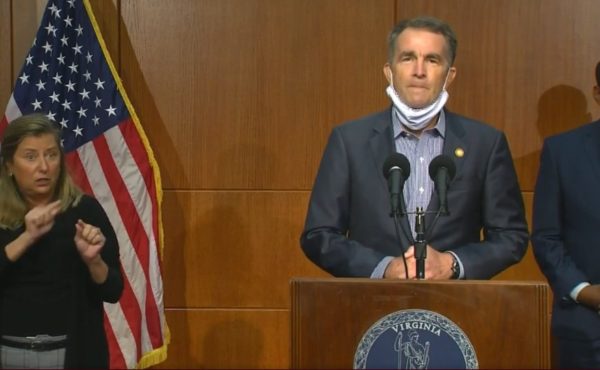 Gov. Ralph Northam said during a press conference today that local health officials are pointing to a “significant shift” of people in their 20s or younger getting COVID-19.

As of today (Tuesday), just over 19% of the total reported cases statewide affected people in their 20s, making it the highest percentage of all age groups, according to the Virginia Department of Health (VDH). In the Fairfax Health District, that age group represents 16.6% of the cases — the third-highest age group behind people in their 30s (19.3%) and 40s (18.5%).

Long term care facilities account for roughly half of the outbreaks statewide and just over 75% of outbreaks in the Fairfax Health District. Northam shared that almost 3,000 people have covered from COVID-19 in nursing homes, bucketing the statistic under one of the several “major steps forward.”

Many school systems around the country, including Fairfax County Public Schools, have been struggling recently about how to return to school during a pandemic as health officials learn how the virus affects kids.

The Fairfax Health District has two of the state’s eight cases of Multisystem Inflammatory Syndrome in Children (MIS-C). Here’s what the Centers for Disease Control and Prevention says about MIS-C:

Multisystem inflammatory syndrome in children (MIS-C) is a condition where different body parts can become inflamed, including the heart, lungs, kidneys, brain, skin, eyes, or gastrointestinal organs. We do not yet know what causes MIS-C. However, we know that many children with MIS-C had the virus that causes COVID-19, or had been around someone with COVID-19. MIS-C can be serious, even deadly, but most children who were diagnosed with this condition have gotten better with medical care.

In addition to noting the age demographics for COVID-19 cases, Northam said today that Northern Virginia is one of the areas of the state with an encouraging percent positivity rate of COVID-19.

“There’s been a dramatic decrease in Northern Virginia,” Northam said.

He noted Northern Virginia’s is 5.7%, while the western region of the state is at 5%. Statewide, the percent positivity rate is right around 7%.

Concern about a surge of COVID-19 cases in Hampton Roads prompted the governor to announce restrictions for that region.

“I’m worried that people are starting to lose hope and that’s not a good thing,” Northam said.

Photo via Governor of Virginia/Facebook