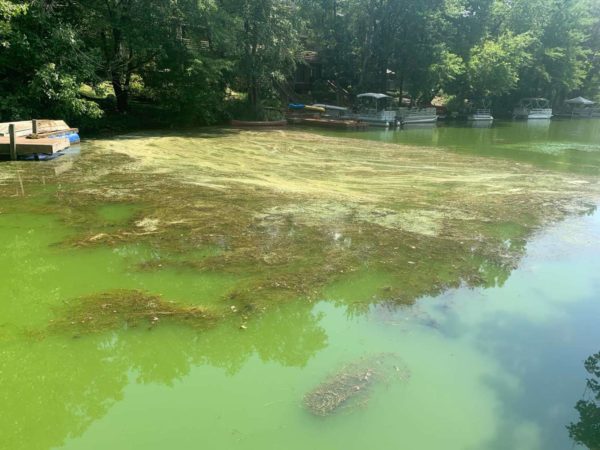 Lab results indicate that a major algae bloom at Lake Thoreau is not toxic. But Reston Association is still encouraging residents to still avoid contact with the water, which has been consumed by the bloom and a dying clumps of the Hydrilla plant.

In a statement, RA said the results “do not at this time detect potentially toxic levels of microcystins in the sample provided.” The algal species does have the ability to produce the toxins if concentrations are high enough.  Residents should stay clear of the water until conditions return to normal. Some algae can cause skin rashes and gastrointestinal illnesses.

RA tried to control the growth of the Hydrilla plant through chemical treatment in late July, which may have created conditions for the algae bloom to thrive. The association noted that the treatment, which some criticized was done so too late into the summer season, did not cause the algae bloom. Other contributing factors include rain, runoff, water temperature, and the amount of nitrogen in the lake.

Local residents have launched an online petition calling on RA to clean up the lake and create a long-term plan to support its health. The petition has 86 signatures thus far.

Algae blooms, Hydrilla infestations, and other issues have bogged down the lake for several years. Some members say RA has failed to create a long-term plan to preserve the lake’s health.

The petition urges RA’s Board of Directors to fund the cleanup of the decaying Hydrilla, set up a community meeting to address concerns, establish a working group regarding the lake, and “hold people accountable for the mismanagement of this important community resource.”

RA has no immediate plans to clean up the dying Hydrilla, which it says will sink to the bottom of the lake over the next several weeks. The association also noted that treating the bloom as the Hydrilla plant dies could compromise oxygen levels at the lake and endanger aquatic life at the lake.