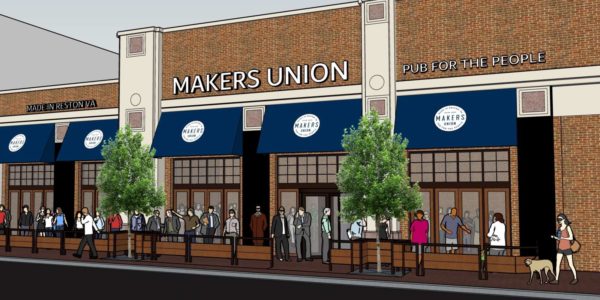 Maker’s Union, which markets itself as a “pub for the people,” is officially opening its doors on Thursday in Reston Town Center.

The restaurant replaces American Tap Room on 1811 Library Street. The project was launched by Thompson Hospitality, a Reston-based company.

In a statement, business representatives recognized it is “a bit of a weird time” to open a restaurant. In fact, Maker’s Union considered passing construction until there was less uncertainty in the restaurant industry.

But the business team ultimately decided to move forward with opening the restaurant because Reston “needs a special local gathering place.”

Beginning tomorrow and Wednesday between 5-8 p.m., patrons can stop by for a preview event. Tickets are $5 for a slider and a can of craft beer or wine. The restaurant will be set up outside with six-feet spacing markers. All items will be served to-go, but patrons can take a peek into the new space.

Masks are required to take part in the preview event, a company representative told Reston Now.

END_OF_DOCUMENT_TOKEN_TO_BE_REPLACED

More Stories
Poll: How Do You Feel About Going to Movie Theaters Again?Small Algae Bloom Surfaces at Lake Audubon