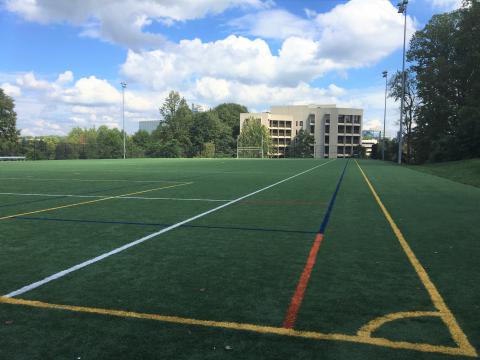 The Virginia High School League is currently working with the governor’s office to potentially get a waiver that would let public school students compete in sports starting on Dec. 7, even if the state remains in Phase 3 of its reopening plan.

“VHSL has worked very closely with the Virginia Department of Health and governor’s office with regard to opening back up and what guidance and changes would need to be made so we can have high school sports on Dec. 7,” Curran said.

Virginia has been in the third phase of Gov. Ralph Northam’s Forward Virginia plan for guiding the Commonwealth through the COVID-19 pandemic since July 1.

Under Phase 3, both indoor and outdoor recreational sports are limited to 250 people, including players, staff, and spectators. Those individuals are also expected to maintain 10 feet of physical distance “where practicable.”

As it is now written, Phase 3 “basically does not allow for high school sports” beyond optional workouts for individual teams, Curran says.

As the nonprofit that serves as Virginia’s governing body for student athletics and activities, the VHSL has spent the past several months developing guidelines that it hopes would enable high school sports to resume this winter with Phase 3 restrictions in place.

After voting on July 27 to delay all sports and activities until mid-December, the VHSL executive committee unanimously agreed on Sept. 17 to adopt a condensed schedule with winter, fall, and spring sports.

Trying to resume sports when FCPS is still wrestling with how to reopen schools for in-person learning might raise some eyebrows, but Meren says she believes it is an important discussion to have.

“I know how important it is for kids to be active,” Meren said. “Sports can be a gateway to scholarships, academics, and careers.”

Moreover, there are potential equity concerns when public schools are abstaining from athletic competitions, but private youth and club sports have continued to operate. Curran says those leagues obtained waivers to proceed, while the VHSL has opted for a more cautious approach.

If high school sports do return this winter, FCPS is currently operating under the assumption that there will not be any spectators, at least initially, though a plan to live-stream competitions is in the works, according to Curran.

Curran says that students and staff have been consistently following health protocols during the limited workouts that FCPS has been conducting since June, and there have been no reports of COVID-19 spread between athletes so far.

However, limited resources mean that FCPS will not be able to test athletes on a daily basis like professional and even college sports have been doing, and while a single COVID-19 case might just affect one player or team, a serious outbreak could jeopardize entire seasons.

Staffing shortages could also present a challenge, with only 70 percent of officiators expected to be available for the upcoming basketball season, according to Westfield High School student activities director Terri Towle, one of two FCPS workers on the VHSL executive committee.

Even if VHSL gets approval to go ahead with its planned schedule, the ultimate decision about whether to engage in sports will lie with individual students, parents, and school divisions.

Towle says that two jurisdictions in Virginia have already notified VHSL that their schools will not participate in winter sports.

“There are going to be certain things out of our control depending on how things go across the county, across the state, across the country,” Towle said. “We’re working toward the goal of as many student athletes playing as possible.”