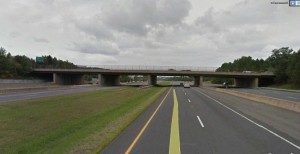 Planning to repair the bridge on Reston Parkway over the Dulles Toll Road is underway after a tractor-trailer crashed into the bridge earlier this month.

According to a spokesperson for the Virginia Department of Transportation, the tractor-trailer struck the bridge and damaged its girder and the connection to its superstructure.

Since the bridge is joined owned by VDOT and the Metropolitan Washington Airports Authority, both entities are devising a plan for repairs.

So far, structural engineers have assessed the damage and are in the “final stages” of creating a repair plan, Ellen Kamilakis told Reston Now.

“Likely, VDOT bridge crews and their contractor will perform at least some of the repair,” she said.

The bridge strike happened on Nov. 20. Since then, the right northbound lane on the bridge has been closed to traffic indefinitely.

More Stories
Fusion Pizza Restaurant Opens on Worldgate Drive in HerndonLegal Insider: Could Employees be Mandated to Get COVID Vaccines by Their Employer?