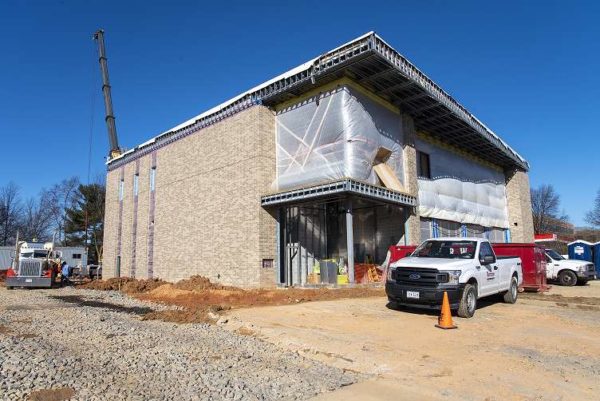 Construction on the long-anticipated new Fire and Reston Station 25 on Wiehle Avenue in Reston is coming along and is planning to be set for occupancy towards the end of 2021, Fairfax County Fire and Rescue’s assistant public information officer Bill Delaney tells Reston Now.

Late last month (Dec. 2020), the department tweeted that the station would be ready by the summer.

It’s beginning to look a lot like…….a fire and rescue station! New Station 25, Reston, is coming along nicely! Estimated occupancy is the Summer of 2021. Funding for the new station was included on the 2015 Public Safety Bond Referendum approved by voters.#FCFRD pic.twitter.com/aNtFAbEcPk

Delaney says the delay is due to extremely wet weather over the last few months and “other challenges that are normal parts of the building process.”

The initial timeline floated in 2018 for completion in spring 2021, so the project appears to be behind that original projected date.

The nearly $15 million project will more than double the size of the previous station. The 17,150 square-foot, two-story facility will have four bays. It will also be able to accommodate up to 20 firefighters per shift and six apparatus equipment including a new engine, according to the architect’s description. The station is targeting LEED Silver certification.

County plans from early in 2018 said the design would have a “contemporary look to compliment the urban feel of Reston Town Center.”

Funding for the new station was included on the Public Safety Bond Referendum approved by voters in 2015. Four other fire stations were included in the referendum for renovation or rebuild. The Woodlawn station in Alexandria is set to open for occupancy in the spring and Edsall Road station in Springfield is scheduled for next year.

The new Reston station is being built on the same site as the old station. That one was built in 1972 and last upgraded in 1986. It was only 2.5 bays and deemed “grossly undersized” for the community.

In January 2020, fire fighters moved to a temporary station nearby at 1840 Cameron Glen Drive until the new station is ready for occupancy.

A Fairfax County official told the Patch at the time that the move would have no impact on the station’s ability to serve the community.

Demolition started in March on the old fire station.